Cups at the Flatiron: 4 Weeks Down and 10 to Go


So what is the hardest thing about being in the window of the Flatiron drawing five days a week? That coffee cart right outside on 5th Avenue. It is just so dang hard to draw! I have now tackled it a half dozen times. Three of the resulting cups passed my keeper test and are hanging in the window. Have a hunt for them. 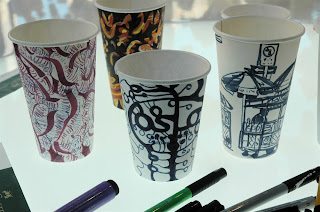 Cups of the Day #90 by Gwyneth Leech.
Recent cups in the Flatiron window.
India ink on upcycled white paper cups.

After that, it is the perspective of the buildings on all these converging and diverging streets. No, I don't have to tackle them, but it is an irresistible challenge. I peer up Broadway and 5th Avenue to the north and try to figure out that crazy skyline. Am I really seeing buildings as far away as 42nd Street? What a vista! 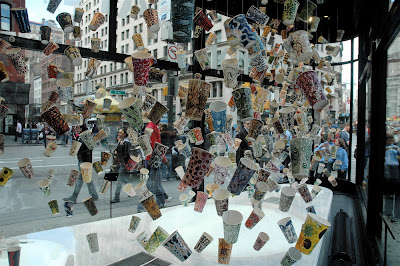 The view from the inside
the cup installation by Gwyneth Leech,
in the Sprint Prow Artspace, Flatiron Building,
where 5th Avenue and Broadway Meet.

Visitors outside the plate glass, and those who find their way in through the Sprint Store are always welcome, as long as they don't mind that I usually won't be looking them in the eye - I have to keep drawing, it is nothing personal. Lots of kids come in on Saturdays especially, and don't want to leave. Thanks to Faber Castell and my now enormous stash of empty take-out cups from all over the five boroughs, there is plenty for everyone who wants to try cup drawing. 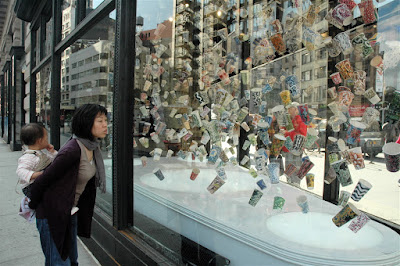 The view from Broadway.
Everyone knows about cups!

Usually mom and dad are too shy to draw, and while little Johnny tries his hand on one, two, three cups they cruise the Sprint store checking out the latest merchandise (which is the new I-phone, by the way). 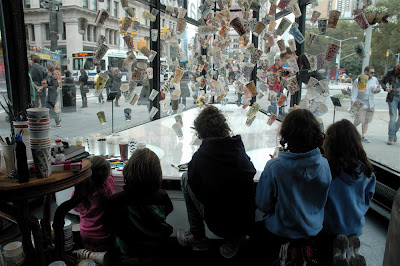 Impromptu drawing workshop inside the exhibit.
A steady flow of kids on a Saturday afternoon.

I am getting to know the rhythm of the Sprint store by now. I arrive each morning a few minutes before 11am with my takeout cup from one of a selection of nearby places (Eisenberg's, Deli Marché, Argo) and catch the eye of the manager(ess) on duty - Rob, Ashley, Precious, Yanelli, sometimes Matt. Then I go and sit in mental Zen space by the glass door leading to the Prow until the key is fetched from a secret location down a spiral staircase and deep in the bowels of the offices below street level. The key arrives, the manager(ess) unlocks with a smile, there is a whoosh of air as the door opens, I am invariably wished a good day, and finally, I have reached the inner sanctum.

The door is left ajar and will be locked again once I leave. I get myself situated: cell phone and camera out, coffee at hand, pull up the chair, take a seat and bam.... I am in the zone for the next three hours, drawing and looking and dreaming and seeming to float on the current of humanity outside the glass. The buzz and music from the Sprint store recede, people and traffic are a distant hum, there is the occasional low rumble of a passing subway train. None of it distracts me. I have to say, it really is a sweet spot for a studio, right in the heart of the city, and four weeks have flown by! I feel fortunate indeed to have another ten stretching leisurely before me. 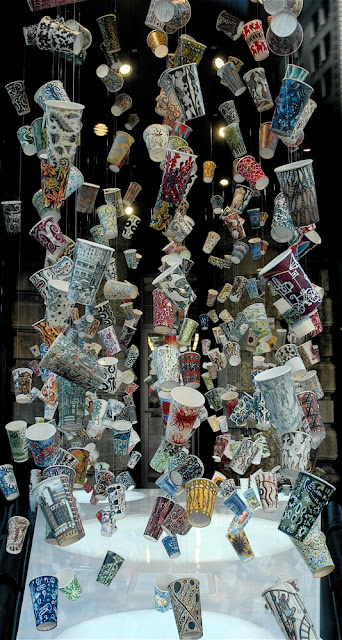 The installation from the very point of the Prow.
The exhibit is changing and growing
as I add new cup drawings five days a week.

Posted by Gwyneth Leech at 1:28 PM No comments:


I am sitting in the midst of my personal ever-expanding universe of cups and thinking about my high school friend, Saul Perlmutter, who just won the Nobel Prize in Physics.
Yep, I am going to say it; I knew him when... 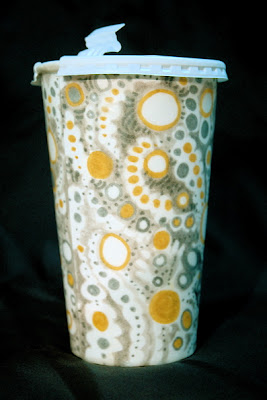 It was 11th grade physics at Germantown Friends School in Philadelphia. I was terrified of word problems. Saul Perlmutter was a friendly kid in the class who happened to be super bright, generous and willing to help me. He had a way of explaining physics so that it all made perfect sense. I passed that class with flying colors and I owe it to him!

My favorite part of physics was undoubtedly all the space stuff - white dwarfs, red dwarfs, supernovae, black holes. Saul's too, I guess, since he went on to study astrophysics and become the supernova guy. 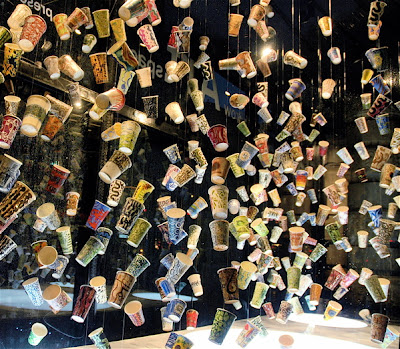 Saul was (and still is) gregarious and funny. In our senior year we were a couple, which essentially involved  going everywhere with a whole passel of his friends and mine - to the movies or piling into someone's living room to hang out and talk on a Saturday night. We went our separate ways in college - he to Harvard, then to Berkeley, I to the University of Pennsylvania, then on to Scotland to study art. But we kept in touch.

In 1988, with his freshly minted PhD in astrophysics and a job as a researcher at Lawrence Berkeley Laboratory, supernovae took his fancy. He wondered if he could devise a computer program to scan the heavens for this rare kind of astronomical event - a task hitherto done only by certain human sky watchers around the globe with extraordinary visual memory. There was great skepticism amongst the sky watchers and astronomers about a computer's ability to match their skill. 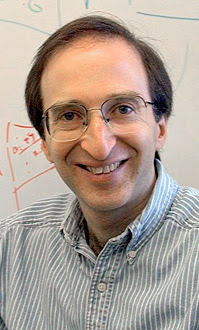 The goal was to use the light of supernovae to measure the speed of the theoretical slowing down of the expansion of the Universe.

The computer program worked; automated searches began to find more supernovae than the human eye. But his team needed a lot of these events. In Saul's hallmark spirit of openness and collaboration, he made the supernova search software public on the premise that the more teams working on the project the better the results would be and the quicker they would get them. He then embarked on many years of traveling to telescopes in far flung parts of the globe and coordinating scientists.

More and more supernova data was gathered but it took ten years to get what they needed. Then it came time to plot the data and see if it confirmed Hubble's theory about the decelerating expansion of the universe. In what Saul calls "the long aha" - a realization made over months - they could only conclude that this classic theory was wrong:
The expansion of the universe is not slowing, but speeding up! And this is a discovery which turns on its head everything scientists thought they knew about the nature of the universe!! 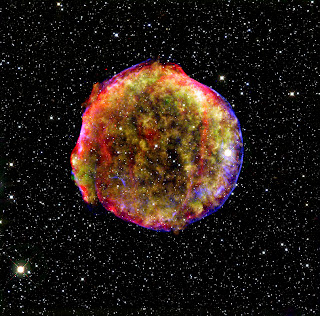 His wasn't the only team to make the discovery. Several teams of astronomers, using his supernova software and doing the same research, had come to the same conclusion. But they had cast themselves as his rivals and the race was on to publication. In 1998 they all published their results within weeks of each other - one group the first to present the findings at a conference, the other the first into a peer-reviewed journal.  Last week three teams were honored with the Nobel Prize in Physics. Saul got one half, the other two teams split the rest.

Over the last ten years Saul has been on an elusive quest to fund the construction and launch of a space telescope devoted to supernova research. In tough economic times the Government funding keeps getting deferred, the telescope gets shelved again and again.

We had the rarest of opportunities to sit down together for coffee this summer when Saul and his wife, Laura, a professor of anthropology, were on sabbatical leave in Princeton and came into the City to visit art galleries in Chelsea.  We met at Buongiorno Espresso Bar on 9th Avenue. To be precise, Laura and I had the espressos; Saul had orange juice. Nary a caffeinated beverage has ever passed his lips. Hmm, if I give up caffeine would I have a hope of thinking more like a Nobel Prize winner?

Talking about the telescope, Saul said that technological advances had lowered the price tag considerably. No longer a billion or so, but mere millions.

"Heck," said a mutual friend later when I shared this, "we should just pass the hat and buy the guy his telescope!" I'm game. I am more than willing to do a cup-drawing fund-raiser if it will help.
Saul, just let me know. 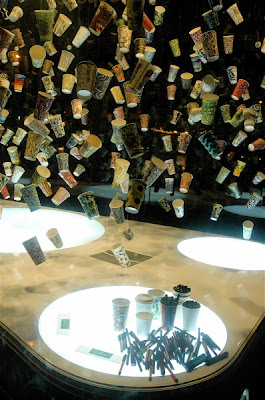 Ready to draw at the Flatiron
Hypergraphia by Gwyneth Leech, October 201

And as for his ability to help ordinary mortals understand physics, he still has it as can be seen from this recent video interview where he explains the science which made him a Nobel Laureate. Moreover, it is apparent that his enthusiasm for science remains undimmed; That is worthy of a prize all by itself.

The cup installation at the Flatiron: the View from the Street


23rd Street, where 5th Avenue and Broadway meet. I knew it would  be a high traffic location; indeed people visit the Flatiron Building in New York City 24 hours a day. But for some reason, I hadn't reckoned on the photography. From giant SLRs to I-phones to videos, the cameras click around the clock, and then the images flow out onto the web. 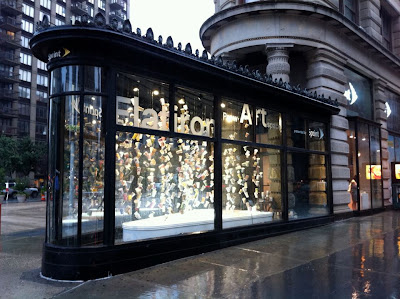 Hanging cups in the Flatiron Artspace
5PM on a rainy afternoon.
Photo by Bernard Klevickas

I am loving seeing the installation through everyone's eyes and enjoy daily e-mails and postings that bring new views taken at different times of the day. I mean, I just haven't made it down there at 6AM yet, but how gorgeous the photo is of the windows before dawn! 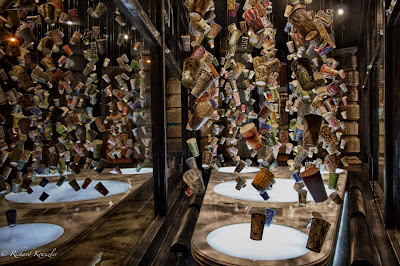 6 AM, photo by Richard Kranzler 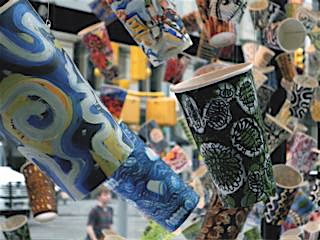 I did try my hand at a little night time photography. Oh dear! I got a few lucky shots, just enough to know that it is not as easy as it looks, even with a tripod. So here is a big shout-out to artists and photographers who have sent images my way. Thank you, and keep them coming! 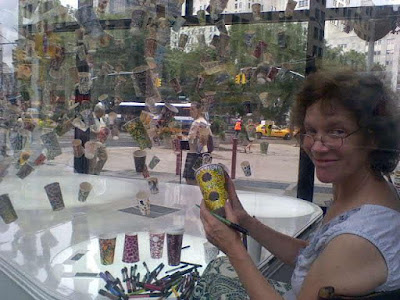 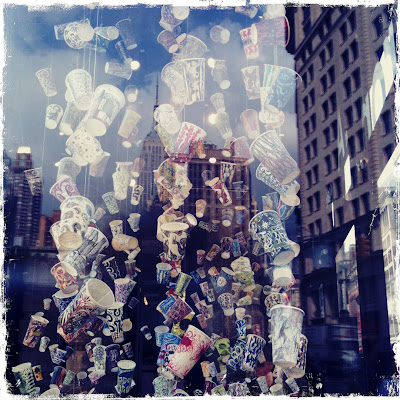 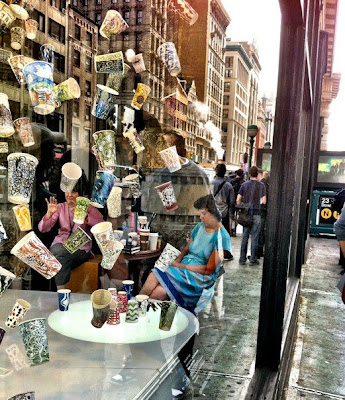 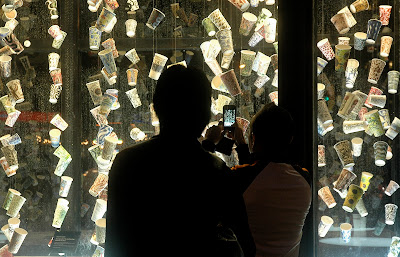 Passersby shooting at night with a cellphone.
Hanging cups at the Flatiron, 8PM.
Photo: Gwyneth Leech