The High Line Park, that extraordinary oasis atop an old elevated rail line in Chelesea, is looking lush and gorgeous right now. The plants are acclimatizing well since the park opened a year ago and it feels more and more like the urban nature preserve of many imaginations, albeit with comfortable places to sit, amazing lighting at night and spotless, litter-free walkways.

There are also lots of trash cans - not found on the old High Line of course - and giving into my trash picking artist instincts I peeked into many during my walk there the other day, doing a quick survey of the contents around noon on a weekday. Far and away, there were more cardboard coffee cups than anything else: Joe's Coffee, Ninth Street Coffee, 'Wichcraft, Starbucks, 7-11, anonymous deli cups and more.  'Wichcraft sometimes has a coffee cart up here, but not today. These are all carry in, and leave behind. 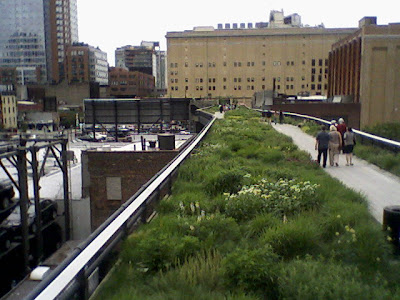 The High Line Park on a June morning, 2010
Is it a New York City thing or is it everywhere, this walking with a coffee cup? Time was, everyone had a cigarette in mouth. I looked around - no cigarettes, but almost everyone had a cup in hand. Someone told me recently, "I love my coffee in a cardboard cup. It means I am out somewhere, doing something, on the move." It has an irresistible appeal, but doesn't it add up to an awful lot of cups? A few days later, my friend Christian sent me a photo he took during the inauguration in DC last year. Ah yes, a lot of coffee cups.

Back on the High Line, I have to admit, I couldn't resist picking out two empties: a Joe's Coffee cup in tender pale blue, and a Ninth Street Coffee cup, all-over black with a crisp white silhouette of a cup on the side. They went into my bag to be drawn on later. It's a slippery slope, this trash picking, but I took the chance. 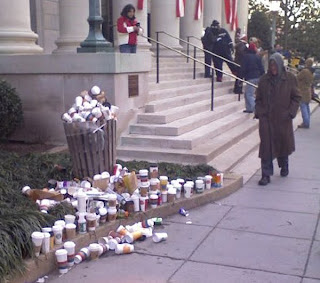 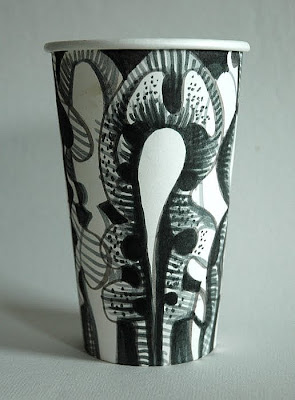 Cup of the Day #28
By Gwyneth Leech
India ink on white cup, 2010
The sculptor Louise Bourgeois died last week at the age of 98. She lived for decades in a narrow brownstone on 20th Street in Manhattan. Every Sunday afternoon, until she was well into her nineties, artists gathered for hours in a cluttered library on the first floor to show her their artwork.

I first ended up at one of these salons when I dared my sculptor friend  Sarah McKenzie Smith, who was visiting from Scotland, to call her up and invite ourselves for tea. Louise's number was in the phone book. How shocked we were when she answered the phone and said, "come this Sunday"! We were even more surprised to meet artists from several different countries there, and a curator from the Museum of Modern Art who sat beside the wizened artist at her work table and handled the artwork. When Sarah made the call we had no idea this happened every week. And each salon was video-taped by an assistant. There must be thousands of hours of tape.

I took my daughter Megan, then five, to one of the salons when the artist was almost ninety. As we entered the house Megan sneezed and was nearly thrown out, but allowed to stay as long as she sat by the window as far away from Louise as possible. Megan had brought a little folder of princess drawings. When Louise saw them she asked, "Who did these?" I said, "Megan, she's five." "Impossible!" declared Louise. Then she had paper brought and gave Megan her own "favorite" red Sharpie to use. Under pressure, Megan drew a very respectable princess. Louise held it up and examined it. "Hmpf," she said, and turned to the next artist.

Louise was rather like a spider at the several salons I went to - sitting behind her table all in black, silently waiting for an interesting art morsel to land in front of her. No tea was served, but there was psycho-drama in abundance. That first time, Sarah and I went elated, but came away disturbed. Many artists have similar recollections. Maybe it is best not to meet your art idols! 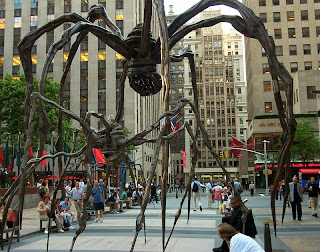