As of June 30th, the Full Brew will be in Ecuador for six weeks to study Spanish, travel and paint.
Venturing offline, with no knowledge of the internet landscape in the Andes and the Amazon,
will there be posts from the Equator? We shall see.
If not, blogging will resume in the Fall with new photos, stories and cups!!

Until then, the Full Brew wishes everyone a summer full of adventure and new experiences. 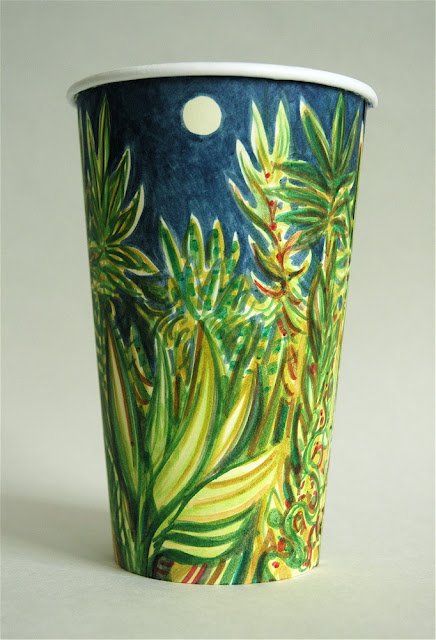 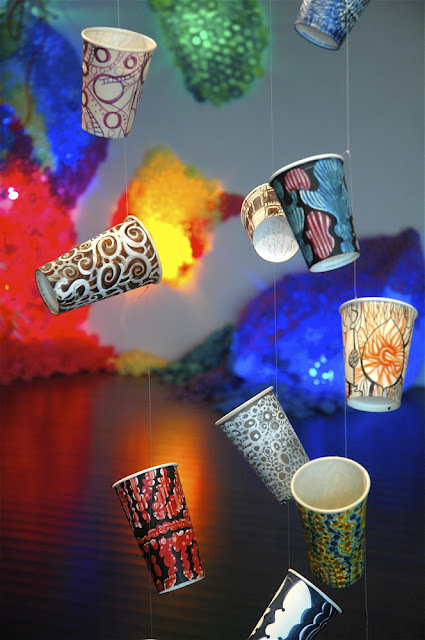 The Pearl Fincher Museum of Fine Arts, also known as the Pearl, is a lovely small museum in Spring, a suburb of Houston, Texas. Craving more culture in their own neighborhood, the denizens of Spring stepped up to the plate and funded this non-collecting art institution which opened its doors in 2008. It was a pleasure to be down visiting from New York City for the opening of Luxuriant Refuse, an exhibition of nine artists who make extravagant art with trash, and to lead several community events related to my own installation of 655 drawings on used paper coffee cups. 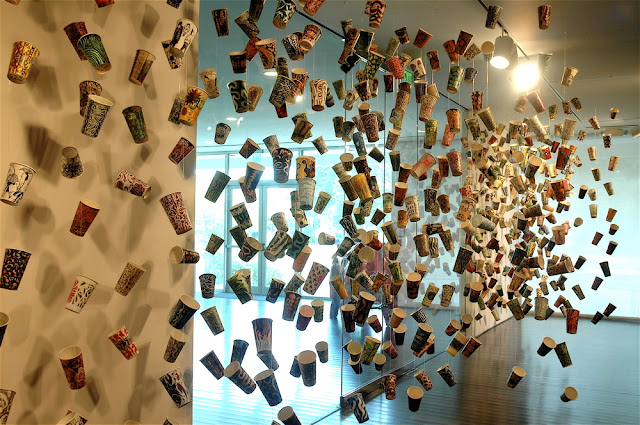 Gwyneth Leech, the Cup Drawings #1 - #655
in Luxuriant Refuse
at the PFMFA, Spring Texas 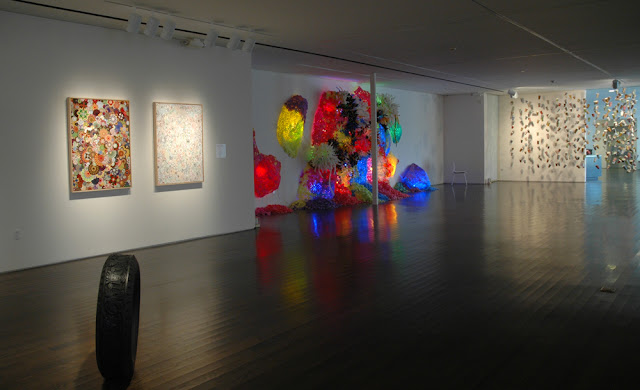 People are enthusiastic about art in this 'hood and they love their museum, which is free. Hundreds of kids and their parents came by for a drop-in art afternoon while I was there and dozens of volunteer docents were kept on their toes explaining the upcycling artwork to these discerning viewers. 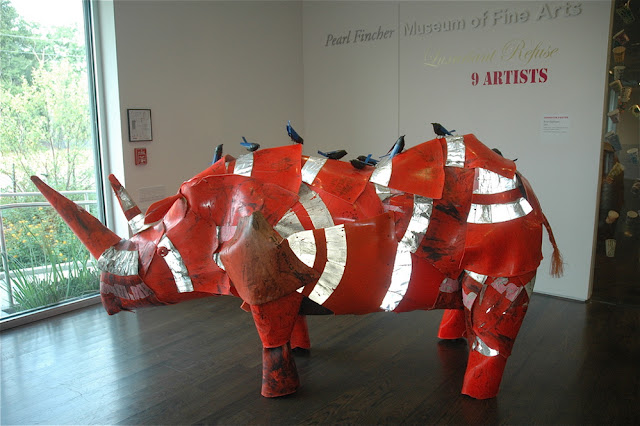 The evening reception was attended by an older crowd: museum members and trustees, art patrons, collectors, artists and gallerists from downtown Houston, and a family of my cousins who live in the area - well, to be more precise, who live at the end of a lengthy express-way drive to the Heights neighborhood of Houston, some 50 minutes away. 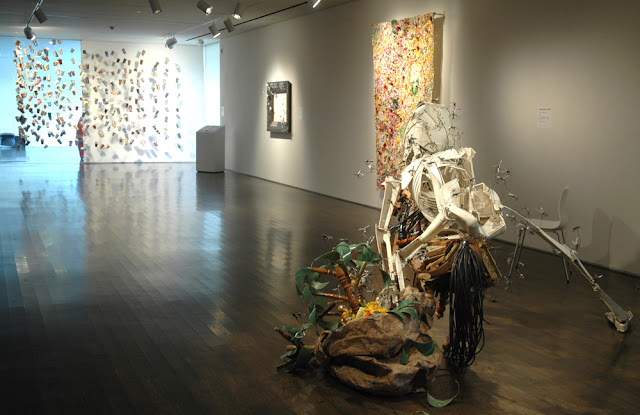 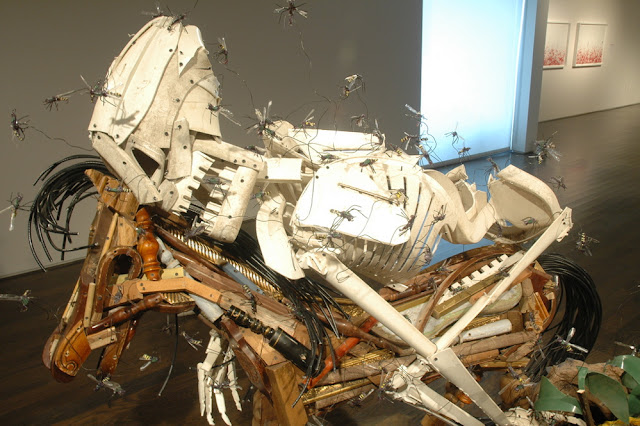 The Collector by Johnston Foster, 2011
Mixed media including found furniture and plastic lawnchairs

A couple of things of note happened around the time of the opening reception. In the first instance, arriving at the museum an hour before the event, I found my cousin Geoff already there. I suggested an ice coffee at a nearby coffee bar. I also suggested we walk. He hesitated, shrugged, and out we stepped from the temperature and humidity-controlled interior of the museum into the blast furnace of a June afternoon. 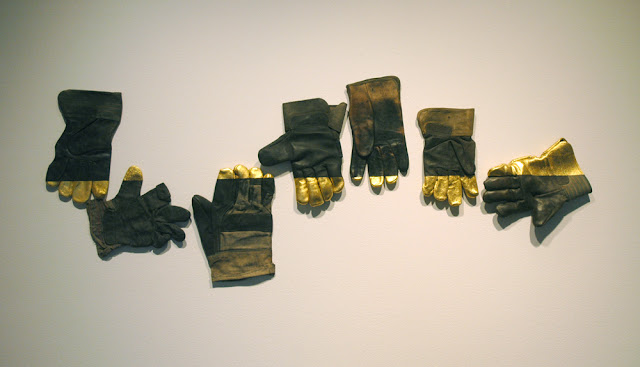 By the time we reached Rao's Bakery Coffee Cafe in the strip mall two blocks away we were bathed in sweat and the ice coffee was certainly needed to revive us. Afterwards, we walked very, very slowly back to the museum, conserving our energy.

A bit later, we stood outside once again, wearing filter glasses and studying the face of the sun with binoculars. Can you see it? Absolutely - that dot is clearly Venus crossing the face of the sun!!
So that would be two things in one day that one should never do - look directly at the sun and walk outside in Spring, Texas in the summer! 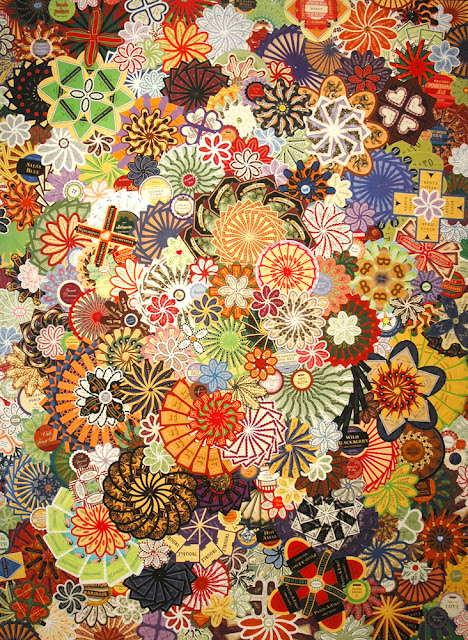 As for the exhibition, Luxuriant Refuse itself, I was delighted to see my cup installation alongside the work of these fellow artists who so imaginatively use "detritus as a medium, exploring ideas about consumption, creativity, and transformation". Each one takes excess to excess, pushing the creative boundaries of the used, castoff and unwanted. Accumulation is the underlying theme, and the mind is boggled by the sheer number of old computer keyboard keys in a work by Sarah Frost, or food labels in what at first seems to be a painting by Alison Foshee. 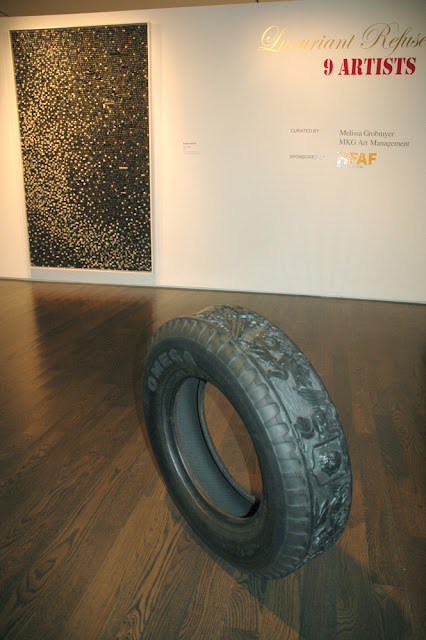 Sign Off by Sarah Frost
and Tire by Betsabée Romero 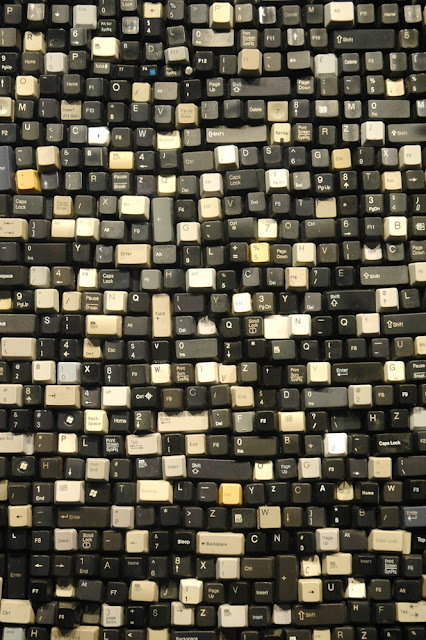 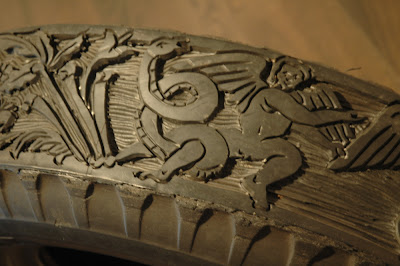 Bioluminescence, a wall mounted installation by Adela Andea is made from thousands of back-lit diced pool noodles - those brightly colored Styrofoam swimming aids found at any pool. It was a show stealer and I was very pleased to meet the artist herself at the opening reception. None of the other artists were present, but since several, including Aurora Robson, Johnston Foster, Sarah Frost and Paul Villinski either live or exhibit in New York City, I have hopes of meeting them and seeing more of their work up North. 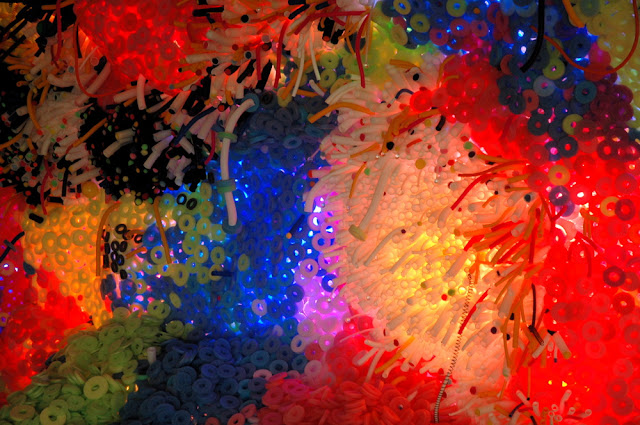 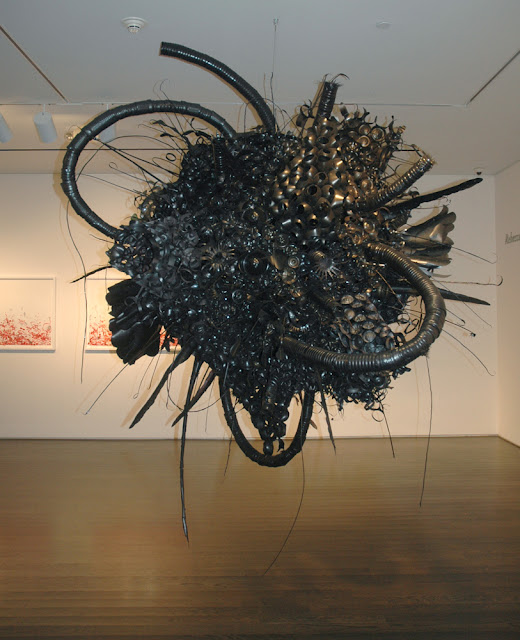 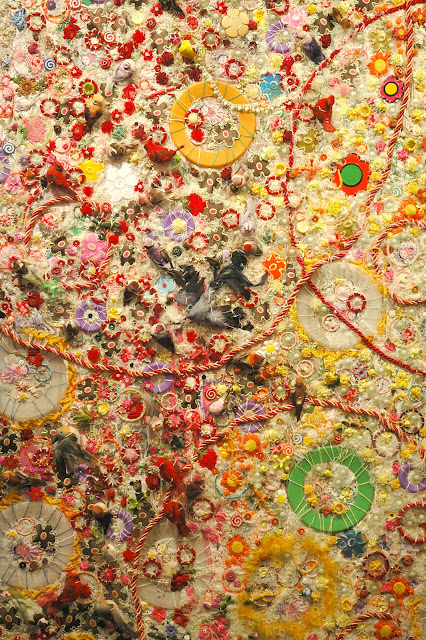 
And thank you Hip Mama Jen, for this review of my contribution to the exhibit:

"Finally I can't possibly discuss the show without mentioning Gwyneth Leech's project called simply The Cup Drawings. Leech has drawn on coffee cups since 2008. On each she also records the date, occasion and location of consumption. The cups are strung in multiples on invisible string and hang in strands that gently sway as viewers walk by. The cups appear to be raining from the sky and the variety of images and patterns are stunning not only for their appearance but for the thought that they instill which is this is the amount of waste produced from one consumer."

Packed and Unpacked: the Cup Drawings Go to Spring, Texas 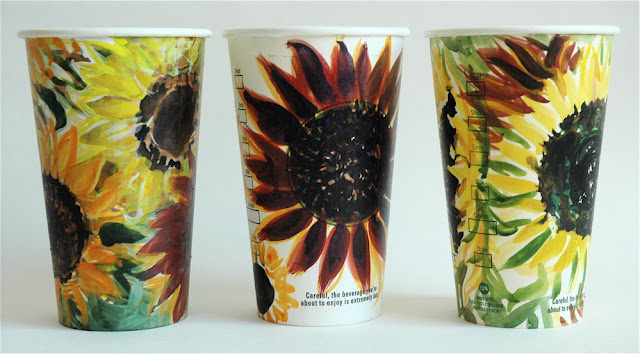 
I had been invited to send a large number of cup drawings for the exhibition, Luxuriant Refuse at the Pearl Fincher Museum of Fine Arts on the outskirts of Houston, Texas. With the floor plan of the Pearl in hand, I had designed and hung an installation of hundreds of cups in my studio which, when transposed the museum, would run for 32 feet along a glass wall at the entrance to the main gallery. This task proved to be a Chinese puzzle in my much smaller space, but I succeeded at last, carefully mapping the installation and labeling every string of cups. 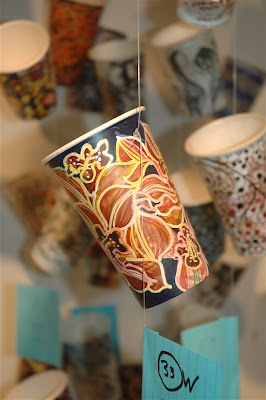 Prepping the installation in the studio
May, 2012

I was a assured that the sun was beating down and temperatures soaring into the mid 90's on these early days of summer. So I spent a long time carefully packing the cups, interleaving each one with stick-proof paper.

This is what I now know - 655 individual artworks is a lot of to handle, photograph and catalogue before sending off into the world, not to mention the time required to bubble wrap and pack them for shipping.

How disarmingly compact and small were the final boxes! I felt an anxious tug at the heart strings as the Fedex man stacked them effortlessly on his dolly and wheeled them out the studio door. 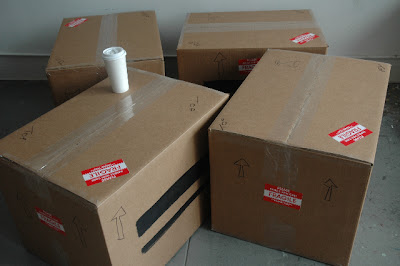 655 cups ready to ship to Texas

A few weeks later, There I was in Spring, Texas myself, actually stepping into the Pearl. I had come to be on hand for several community events and to attend the reception for the show. Directly inside, to my delight and relief, was the completed installation very much as I had envisioned it, the 80 strings hung from 80 cup hooks as per my map. It looked right at home as part of this show of nine artists, all of whom use trash as a medium to make extravagant works of art. I my next post, I will provide a full tour. 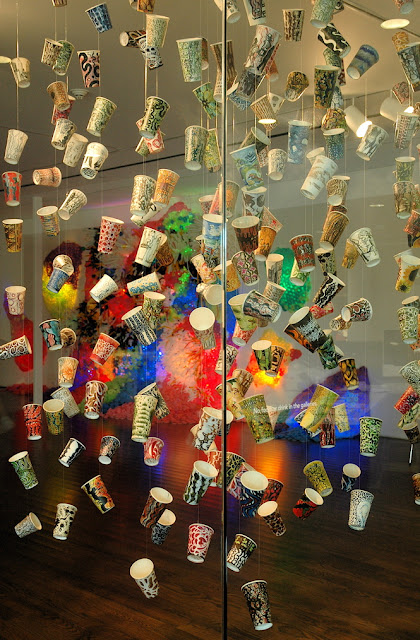 In the meantime, here are a few of the shots of the cups in situ at the Pearl, where they will remain until August 5th. 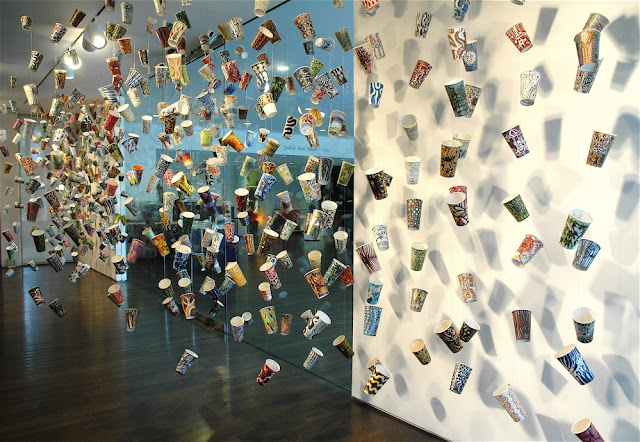 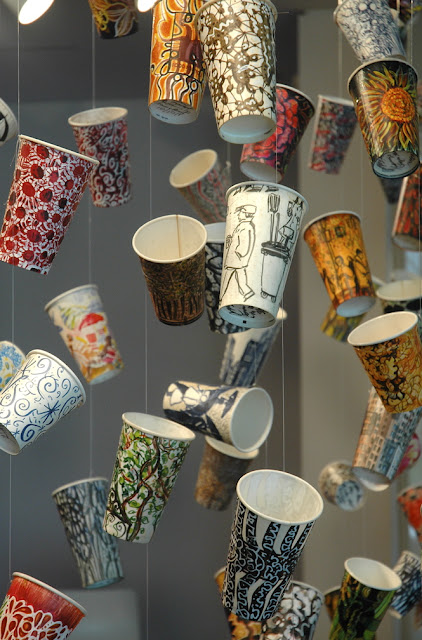