Here for Real: The New PS 51 Set to Open on West 44th Street 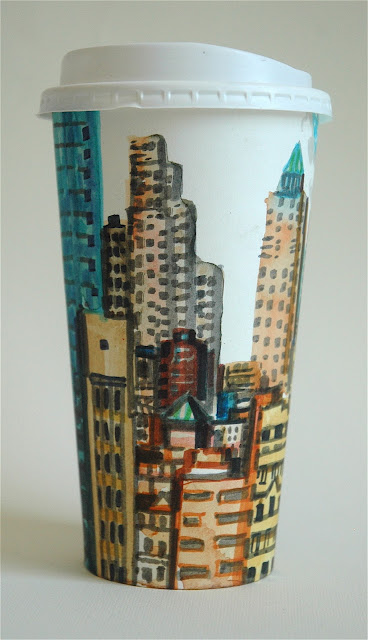 Needed for over 20 years, discussed and planned for 12, under construction for 3 - and now it is here!
New York City Public School 51, a.k.a. PS 51, a.k.a. the Elias Howe School, a.k.a. "the Pride of the West Side" will open to elementary students on September 9th, 2013 in a brand new building on 44th Street between 10th and 11th Avenues.

This Wednesday morning I had the privilege of an early walk-through with members of the Task Force, a group comprised of the many stake-holders in the new school construction effort: parent, teacher, school administration, community, construction and political representatives. I myself am a PS 51 parent rep. Until now, I had only ever seen the liaison from the School Construction Authority standing in front of an architect's rendering of the new school. And here we were, entering the actual front doors! After so many years of talk, effort and struggle, not to mention the stresses of a two-year relocation to a temporary building on East 91st Street, it was hard to believe it was real. Yet administration and teachers have already taken possession and are busy unpacking and setting up classrooms and offices on every floor, even as teams of workers continue to make their way down the list of finishing items.

Picture if you will the old Elias Howe building - an erstwhile sewing machine factory on 45th Street which housed PS 51 from 1940 until 2011. For gym, auditorium and cafeteria we had one single room, which, by the way was also the local polling station! In the new building there are large, airy and light-filled spaces at every turn: five floors of generously proportioned classrooms with state-of-the-art technology, wide hallways and stairs, a pristine library filled with over 4000 new books, specialized science, art and music rooms, a health clinic, and not one, but two gyms. The second, a gymnatorium houses a fully kitted out theatrical stage. Behind the school is a surprisingly large play-yard filled with light and ringed by sizable trees, and atop the school is a roof playground covered with silver netting. Finally, there is a large separate cafeteria with adequate sound-proofing and a beautiful kitchen for on-site cooking!

What follows are some preview shots of the new spaces, leading off with Principal Nancy Sing-Bock in her office. I am delighted that our family will be returning for fifth grade and we look forward to joining a reinvigorated school community in celebrating our magnificent home. This new school is a  great example of the whole Hell's Kitchen community coming together to make things better for our kids. We extend our warmest congratulations to all who worked so long and so hard and overcame so many hurdles to make it a reality!! 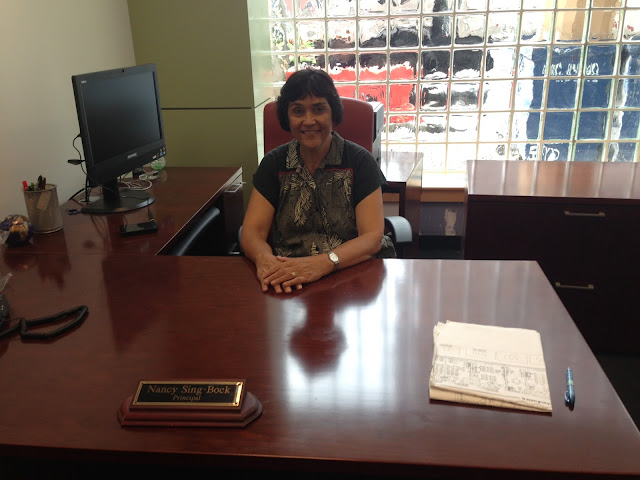 Principal Nancy Sing-Bock in her brand new office on the ground floor.
The only work item on her desk so far: floor plan for the new school! 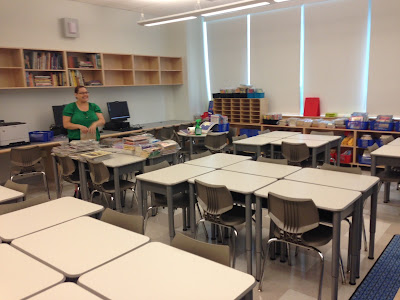 Christine Keskemeti setting up her 4th grade classroom on the 4th floor. 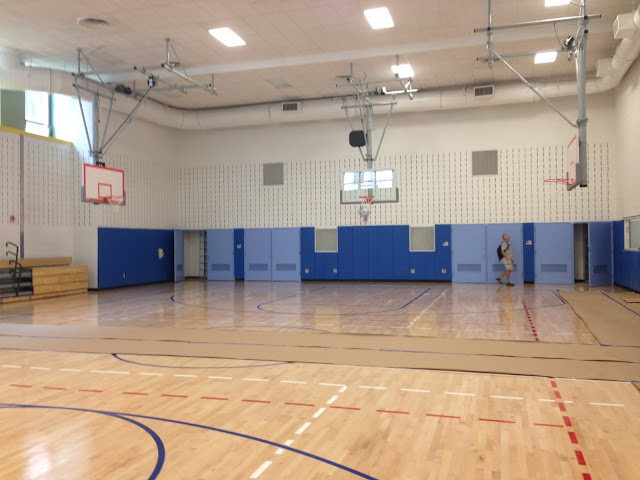 In awe as we discover the double size gymnasium on the 3rd floor. 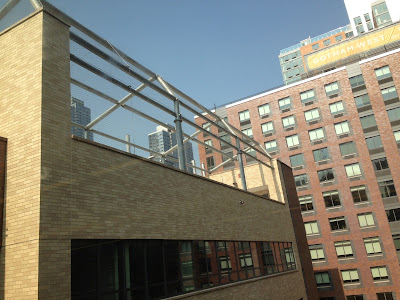 A view of the rooftop playground
from the art room windows on the fifth floor. 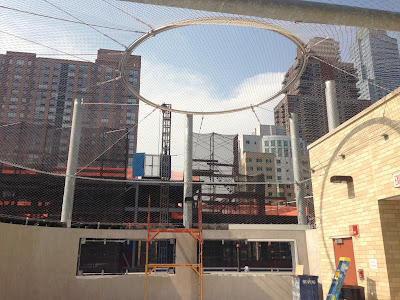 Silvery netting on the rooftop playground allows full view of the sky. 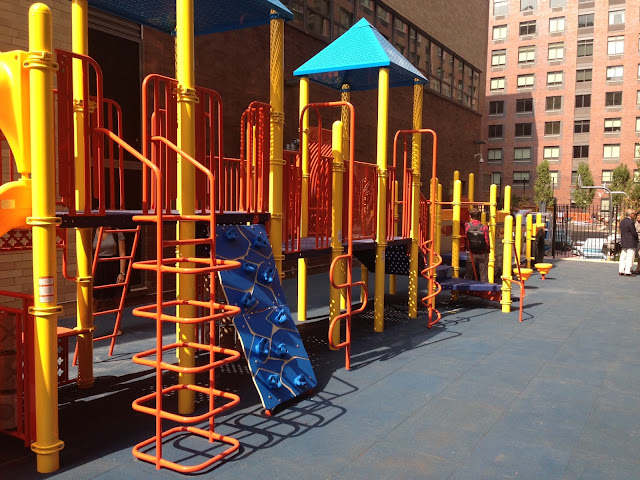 Play equipment lacking for nothing but the arrival of students on Monday, September 9th.

PS 51 is a zoned, neighborhood Pre-K through 5th elementary school with a strong and resourceful principal, a dedicated administration, an energetic and creative teaching staff, and a diverse and genuinely inclusive student body. For more information and to find out how to register, visit http://ps51manhattan.com

Have Gwyneth's Full Brew delivered directly to your inbox!

Ode to a Citibike - A Fan Tells All 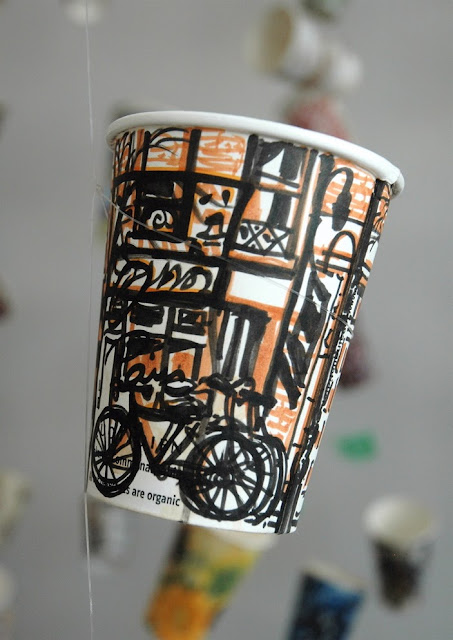 It has been just a few months since I saw my first Citibike rider and hailed him on 10th Avenue in Hell's Kitchen. He was exhilarated by his outing, a rapid run up from 14th Street on Memorial Day, and he declared himself perfectly satisfied with the sturdy blue three-speed. My husband and I were early adopters. For a $100 annual fee we would be able to use any Citibike for 45 minutes free of charge. As soon as we got our keys in the mail we were out on the streets during the preview week exploring new bike lanes and the quirkiness of the solar-power-operated docking stations that sprang up all over Manhattan below 59th Street and in parts of Brooklyn. Everywhere we rode, people quizzed us about the experience. In no time we became diehard fans.

Do I have complaints? Well, since you ask - we kind of wish the program wasn't so popular! At peak times - mornings and on beautiful summer evenings - it is hard to find a bike in our neighborhood. It is a sad feeling to arrive, helmet in hand, at a completely empty docking station, or one with two or three bikes remaining. On most occasions those few bikes will show the accursed red light and sport a flat tire or seat swiveled backwards to denote a mechanical problem. But by using the map on the cellphone app we usually find bikes and get underway. Conversely, when it comes to returning after a night out, it is a blow to find every single docking spot taken! Again, a walk ensues to find a less frequented station. 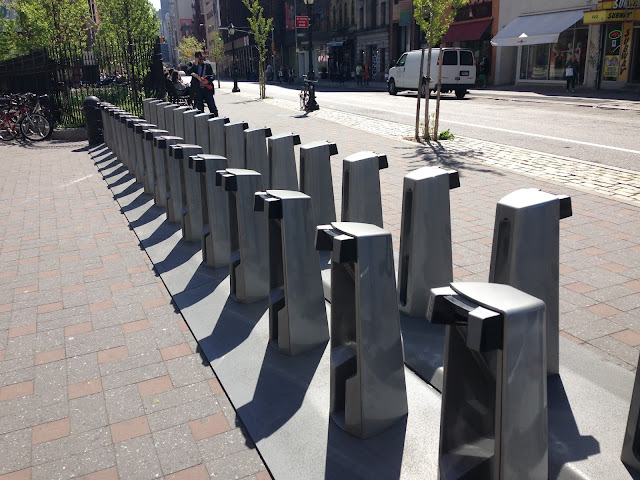 Empty bike docking station at Spring and Lafayette.
I confess that this shot was taken before the bikes arrived,
but it's not an unfamiliar sight around town at certain times of day

But quibbles out of the way, I have to say I love this shared bike thing. The Hudson River Park is a top favorite route to anywhere, even if it means a detour. Nothing beats the long stretches of open pathway with few traffic lights to interrupt a journey. What can be better than whizzing to your destination while leaving rush hour traffic jams behind you, feeling a summer breeze on your face instead of sweltering on the subway or sitting in a cab watching the meter climb? 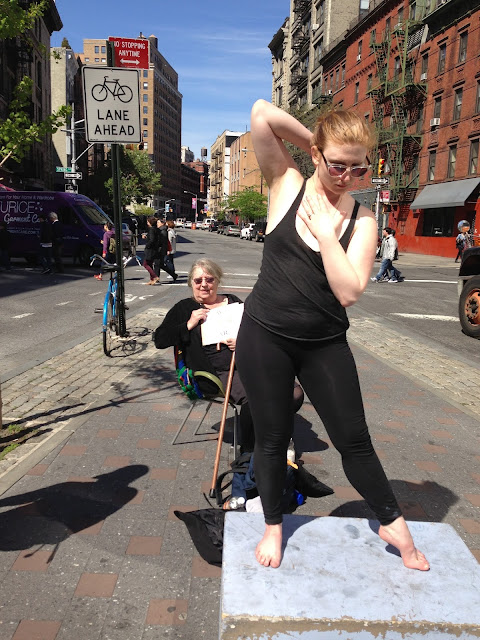 Minerva of Spring Street Studio stages a "draw-in"
on the corner of Spring and Lafayette Street last Spring,
to protest the loss of public art space to a bike station

This weekend I decided to take a Citibike to the Lower East Side on a sunny afternoon following a rehearsal in Midtown East. It was a straight shot down Third Avenue, dodging some bike traffic coming the wrong way (mostly deliveries) and an array of left turning motor vehicles (they were yielding to bikes, but I always were a helmet). The greatest hazard of all was the unpredictable appearance of texting pedestrians (please look both ways before stepping off the sidewalk!!) 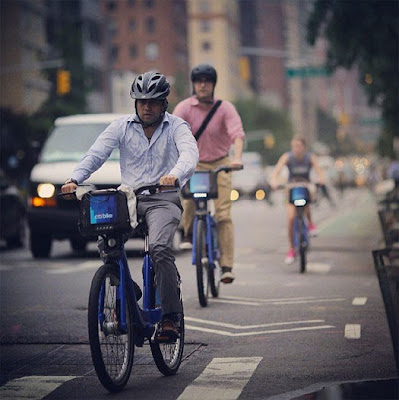 Once on the Lower East Side it was a delightful ramble through the shady streets along designated bike-lanes. And on arrival at Suffolk Street, my chosen destination, all I had to do was dock the bike firmly, get the green light and walk away. No need to worry whether it would be stolen within thirty minutes of parking it outside, as happened with the only bike I ever owned in NYC! 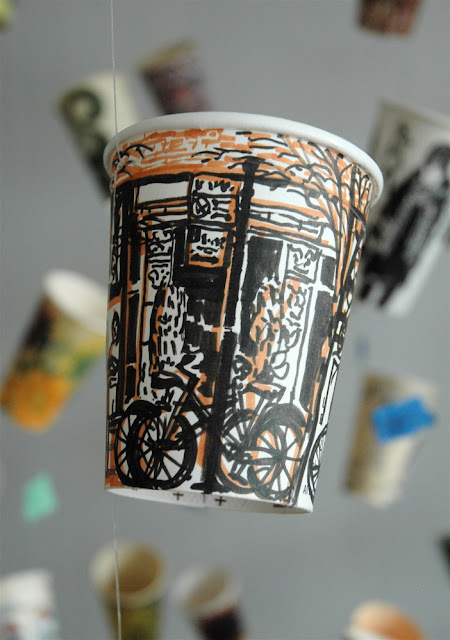 My intention was to visit some of the many art galleries that have sprung up on the Lower East Side in the last few years. Some can feel like a longish walk from subways, but the bike share gets you there with ease. So I did a tour, albeit somewhat sweaty and disheveled and carrying a bike helmet, which made for some interesting reactions when I entered galleries. For warm reception, despite how I looked, I have to give a shout-out to Leah Oates, director at Station Independent on Suffolk, John Baber at Lesly Heller Workspace and Valerie McKenzie at McKenzie Fine Art, both on Orchard Street. I have already decided what I am going to do with all the money I am saving by not using the MTA and taxis so much - I am going to buy art! And to start, I have my eye on something by one of the artists in Reticulate at Mackenzie Fine Art. Talk about a transportation revolution!

Have Gwyneth's Full Brew delivered directly to your inbox
Posted by Gwyneth Leech at 9:53 PM No comments: