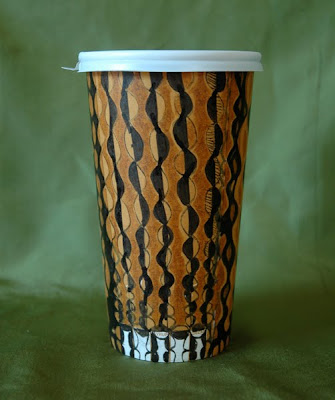 It started with the decision to go see Jacob Kedzierski's photos in a show at Baboo photo Lab on 20th Street between 5th and 6th. I had heard about his large scale photo-collage using a shot of every street sign in New York City and I wanted to see it for myself.

I was on 5th Avenue where by chance I had come across a butter yellow Van Leeuwen's Ice Cream and Espresso Truck parked at 15th Street. Known for an impressive array of organic ice cream flavors, their coffee also rocks. They use Intelligentsia, a fair trade coffee, the beans roasted in Chicago.  One of their five vans is parked at this location Monday to Friday and they Tweet their movements here.

I tried an Affogato - vanilla ice cream (beans from Papua New Guinea) drenched with a shot of hair-raising espresso. Wow! Highly animated after this, I was ready to walk straight across Chelsea on 20th Street from 5th Avenue to the West Side Highway.

First stop, Baboo at #37. Jacob's piece was a satisfying crazy quilt of street signs and traffic signs arranged into a kaleidoscopic cityscape - the product of months of shooting and many hours of photoshop.

From there I strode west and was met with a panoply of unexpected treasures, including:
- A Chinese import shop, ancient-looking chests lurking in darkened recesses and knock-offs of contemporary Chinese paintings hung by the door.
- At 7th Avenue a tiny girl in a starched primrose frock and red hair bow, joyfully new to walking, rounding the corner with an attentive nanny right behind.
- One, two three amazing coffee shops in a row: Spoon, Cafe Grumpy and the original La Bergamote.
- The modest brownstone at #347 where 98 year old sculptor Louise Bourgeois still lives, bringing back the recollection of several tea salons there (a good story for another occasion!).
- A cascade of wisteria in bloom, hanging over the wall of the General Theological Seminary at 9th Avenue, abuzz with bees.
- Finally, the Renegade Accordianist sitting by the steps leading up to the Highline Park just past 10th Avenue. Sporting a cardboard Centurion helmet, he was playing rather doleful tunes but was cheerful when I engaged him in conversation. A student at City College, he is training to be an engineer and is excited to be starting an internship with the MTA next week. I dropped a dollar in his box and continued along the final block of the transverse. 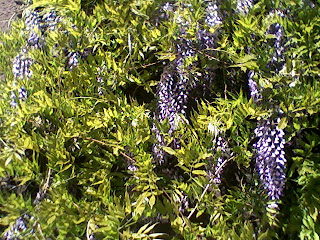 My ostensible destination was Elizabeth Dee Gallery at the corner of 20th and the Westside Highway, where Ryan McNamara was giving a running commentary on his life to all comers over the course of four days. When I got there he was still in good voice, explaining the multifarious stages of his colorful career as dancer, curator, painter, performance artist and prankster, illustrated by a gallery-full of photos and videos. His taste for theatrical wounds was interesting. (The question I didn't get to ask - is that a real black eye he sports in the studio photo taken when he was about two?)

However, it was at Kim Foster Gallery nearby that I made coffee landfall again. In John Kirchner's solo show, sadly just closed, "Reflections on the Process of Assimilation" was a standout installation. A man's white dress shirt hangs suspended in mid-air. The lower part of the sleeves and shirt tails are coffee-stained and the brown color appears to be draining down from the shirt in thin streams into three cups of real coffee sitting on the ground directly below. Or perhaps the color is wicking upwards, turning the shirt from white to brown? When I was there the installation was still available for purchase at $10,000, refills not included. 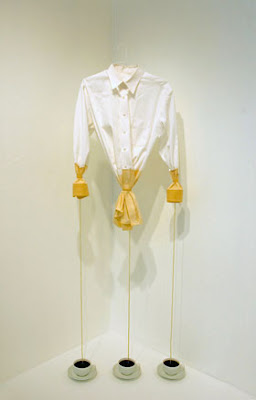 Reflections on the Process of Assimilation
By John Kirchner
from A Short History of America and Its Peoples
Photo courtesy of Kim Foster Gallery
Posted by Gwyneth Leech at 6:00 AM