Behind the Bus Station 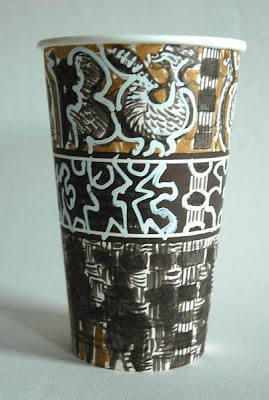 Cup of the Day #30
Classical Cup, Version 2
By Gwyneth Leech
Color India ink on white and brown printed cup
It has been too long since I last wrote. I hurt my left elbow weeks ago, carrying home too many bags of groceries. Unfortunately, I am left-handed. It rather hurts to draw, which has slowed me down.

I shop on 9th Avenue pretty much every day, European style. The Big Apple Meat Market and Stiles fruit and vegetable market on 41st and 9th are usual stops. Then I head to some more interesting shops a little further South, behind the Port Authority bus station. I regularly buy raw shrimp by the pound from the Sea Breeze Fish Market at 40th street (I steam at home with Old Bay seasoning). Crabs and a wide array of whole fish are tempting; I should learn how to cook them.

A few doors up from Sea Breeze is the International Market which is crowded with heaped barrels of spices: Cumin, turmeric, paprika, black pepper corns. The intensity of the color amazes me when I have my artist eyes on after a day of painting. I buy humous, tzatziki, taramosalata, spinach pie and sometimes ground coffee, and exchange a word with the Greek merchants. Finally, I stop by Empire Coffee and Tea company for a cup of Barry's tea and often purchase a box of Scottish Blend tea bags.

A fruit stall has appeared on the sidewalk between 42nd and 43rd. The Chinese fruit seller always gives me a special price or an extra piece of fruit. Some weeks ago, I bought several pounds of fruit too many, and carrying that along with everything else the elbow was strained by the time I got to my door five blocks later.

A lot of my neighbors do this differently. They order from Fresh Direct by computer. A young man shows up every afternoon wheeling dollies stacked high with cardboard boxes. Up and down the tenement stairs he goes, ferrying the boxes to the upper floors. I am enticed, but the thought of breaking down all those boxes fills me with ennuie. Plus, I would miss my interactions with the shopkeepers, as well as the conversations and dramas in the check-out lines.

Most especially, I would miss the weekly sight of a crew of uniformed firemen shopping in the Big Apple Meat market for the makings of spaghetti Bolognese. They pull up outside in their full-size fire truck and pile into the narrow aisles of the market, baskets in hand. Really, it is worth the price of a sore elbow just to see that. 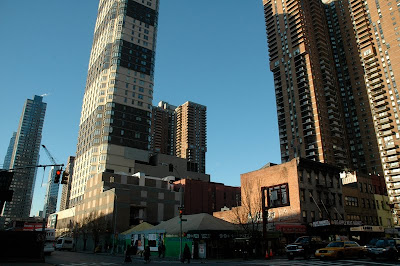 Stiles Market and Big Apple Meat Market
Nestled beneath the new towers
of Midtown West, 2010
Posted by Gwyneth Leech at 9:00 AM