Doing the Rounds: Espresso on the Lower East Side 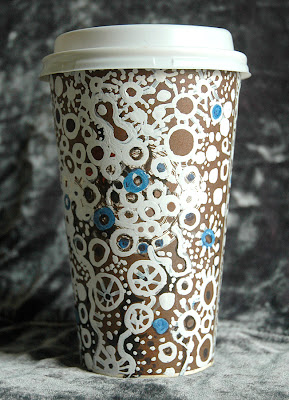 I stopped by Cheryl McGinnis Gallery on 8th Avenue and 38th Street the other night for the opening of Radial Patterning, an attractive show that appeals to my own off-beat patterning tastes. The Full Brew  recommends it.

While there I ran into W., a mom I see in the neighborhood and know from Preschool days 10 years ago, but who I have never seen in an art gallery before. She is a friend of April Vollmer, one of the exhibiting artists. W. and I had a friendly chat about life and public schools and then I went on my way.

Next stop was a couple of gallery openings on the Lower East Side, half of Manhattan away - A train to the F train to the Delancey Street stop. I went to support Mia Brownell and Judith Page, artist colleagues both having solo shows in that 'hood.

On the way down Orchard Street for Judith's show, I noticed the Tenement House Bookstore all lit up. A book reading had just finished and a crowd was milling about inside. Hm, I thought idly, I will step in for a minute. Maybe I will see someone I know? Not likely because I really don't know anyone in the booky set.
But as soon as I enter I see... W's identical twin sister! Literally.
"Oh," I say, "I just saw your sister at Cheryl McGinnis Gallery!"
"Yes," she said, "she went there tonight and I came here."
So what are the odds that in this city of 8 million I would run into both sisters on the same night, miles and a culture world apart?
It really is just a village.

After the openings I stopped at Orchard 88, a pleasant café which opens airily onto the corner of Orchard and Broome Street. There I was happy to see no one I knew. While sipping a pepperment tea, I fell into conversation with the manager about their coffee specials. Too late in the day for me, but I am going to go back soon to try their Frozen 88 - vanilla gelato, caramel and espresso, the coffee roasted locally at Irving Farms.

Orchard 88 has been there seven years. Big gentrification is afoot down on the LES. Back then, it was one café in a block of brassiere vendors.
Now that would have been a sight to see. 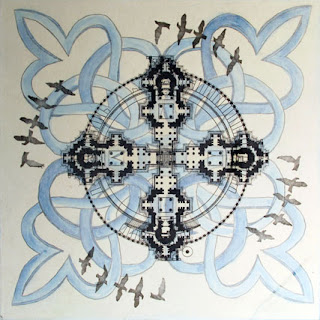 
From April: "this is woodblock and mixed media on washi, mounted on a 12 x 12 x 2 inch wood panel. Kosha refers to the layers of the self in Indian philosophy, and the work is made from multiple layers of slightly transparent Japanese paper.
It is a series of 12, some include drawing, some include offset printing on washi, but I tried to get some woodcut in all of them."
Click here to visit the exhibition website