Cup of the Day #38
by Gwyneth Leech
Colored Ink on white cup
with black printing, 2010

While passing by the Mies Van Der Rohe building on Park Avenue the other day, I noticed one of Jeff Koon's gigantic balloon dogs in the lobby - fairly filling the space with shiny bravura. The building, the dog and the people going in and out were all clean, shiny and full of confidence - as if market implosion and financial woes were a thing of the past, New York City on a solid rebound.

Last Spring I had a different kind of encoutner with a Koon's Balloon.
It was a rainy afternoon. I was on my way to the World Financial Center in Lower Manhattan to help set up for a public school fund-raiser in the Grill Room.

I had gotten off the train at the Chamber Street station, turned West down a down a side street and entered Amish Market, a large fancy food store that has nothing whatsoever to do with the Amish. They do, however have a very nice bakery, and it being afternoon tea time I treated myself to a Bigelow English Tea to go, and a sumptuous mixed fruit tart worthy of a French Patisserie.

Armed with my version of an extravagant expenditure in a paper bag, I went out again into the dreary wet to walk the several blocks to the World Financial Center on the Hudson River. My route took me down to a little plaza that faces the fences surrounding Ground Zero. There, to my surprise was one of Jeff Koons' enlarged balloon toys, fabricated at incredible expense for  the artist by Carlson and Co, a foundary which had gone out of business just the month before.

I have been fascinated by Jeff Koons since I first saw his work in an East Village art gallery called International With Monument in 1986. That show included J.B. Bourbon bottles in the shape of a train and silver plated. Art? Why not. It was in an art gallery. And guess what - that piece sold at Christie's for $5.5 million in 2004.

Much later, his giant Flower Puppy appeared in Rockefeller Plaza. Delightful. My kids loved, I loved it, everyone loved it.

These shiny balloon things first hit the market almost 15 years ago as the Celebration series, sold for big bucks by Gagosian Gallery. Collectors snatched them up. In 2007, talking about extravagant expenditures, Gagosian himself bought back Hanging Heart at Sotheby's for over $23 million. Very cool - kitsch for billionaires!

That wet, cold afternoon in the Spring one of those same sculptures did not look at all cool to me. It is nearly, if not the only piece of public art down there, facing the tall ugly fence which still surrounds the site of the World Trade Towers hole in ground. And on my way to a public school event designed to replace funds lost to heavy municipal budget cuts, fallout from the market crash of 2008, the billionaire's plaything looked like nothing more than a drab, half-deflated party favor left on the floor when the fun and games are over.

Six months later, I am wondering, is it possible that the party is back on? 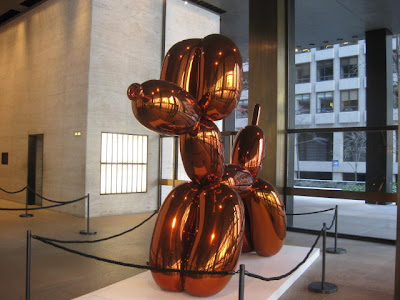 Posted by Gwyneth Leech at 1:24 PM