Tuba and a Latte Redux

I was down at Stuyvesant High School this morning tagging along after my ninth grade daughter on Open Class Day. Other parents were in evidence, though fortunately not all the possible 7000+ parent body. Those of us sitting in on my daughter’s classes looked a little shell-shocked as we tried to process long-forgotten lessons in Spanish conjugation, congruent angles, the human digestive system, sentence patterns, blind contour drawing, Plato’s Republic and a debate about censorship by the Philosopher
King. Between classes was not-so-rapid transit via escalator and stairway from fourth floor, to tenth, back down to third, up again to seventh and finish on first (four minutes allowed for each transition). A typical schedule, but the Friday before Halloween, not a typical atmosphere as bewigged and costumed students thronged by.

The highlight of the day for me was band class. A parade of rather dented brass instruments came out of the instrument closet, crowned by four wonderfully battered tubas. My daughter perched on her chair, dwarfed by her tuba and pulled from her school bag the mouthpiece bought just weeks ago. With no fanfare, Mr. Winkel raised his baton and 60 instruments began a cacophony that resolved quite quickly into a note. B flat scales were requested and played with increasing accuracy and ensemble. Then, briskly, they were on to page 16 of the band book. Was it? Could it be? Did I recognize the Jet Blue March? (All right, I have never heard it before, but it was definitely a march).

“Ok”, said Mr. Winkel, “bass line only, please”.
And the oompah pahs of the tuba section shook the rafters!
I was proud, and granddad smiled down from trombone heaven.
Really, I am impressed. Take 60 bright kids, add 60 instruments they have never played before, put them in a room with a skilled music teacher and stir. Six weeks later you have the makings of a real concert band.

The latte this time was bought after school, a few blocks away in the World Financial Center, at the end of a breezy walk along the stunning Hudson River esplanade in Battery Park. I stopped into Financier Patisserie and ordered a decaf Columbian/African blend. It came in a paper cap with a Solo Super Traveler, slide-open-and-close, patented plastic lid. Truly, the world is full of wonders. 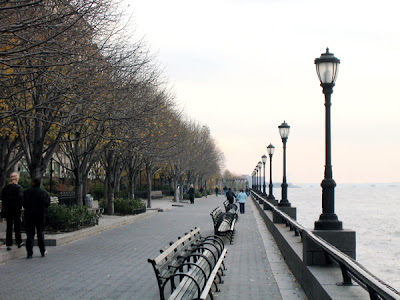 Posted by Gwyneth Leech at 5:23 PM