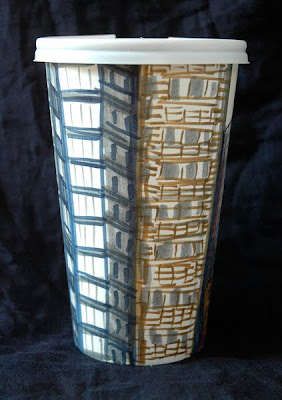 
The pride and joy of our 5th floor walk-up on West 47th Street is our eat-in kitchen. You can't swing a cat in here, but we have a half circle table up against the wall and we four squeeze around it to eat dinner together every night. We imagine our neighbor Angelo Gugliemo, a film-maker, sitting at a matching half circle table on the other side of the wall.

Many Saturday nights find us eating while we listen to Garrison Keillor's Prairie Home Companion on the radio. The show's dry wit and low key charm have grown on me since I first heard it in my Grandmother's Philadelphia kitchen  in 1977(!) When I realized that it is often broadcast live from the Town Hall on West 43rd Street in New York City, just a few blocks from where we live, I became even more interested.

I was passing by the Town Hall just the other day on my way to an artist talk at the Mid-Manhattan Library. I stopped into the box office on a whim and came out with four tickets. That was easy. So this Saturday night found us not at home eating dinner, but in balcony seats, while The Guy's All-Star Shoe Band warmed up the audience until the red ON AIR light snapped on and the familiar strains of the Prairie Home Companion opening sequence began.

Actual brew finally made an appearance when Keillor took the microphone to deliver the Lake Wobegon news. In his left hand was a cardboard cup, tell-tale tea bag label hanging over the side. Up and down, round and round went the cup as his arm movements ornamented the tale of a hapless neighbor soaked by rain then coated in falling plum blossoms -"he looked like a Snowy Egret". Just when I thought he was finally going to drink the tea, he set the cup down untouched on a stool and finished the yarn with one hand in his pocket. Was it just a prop?

On the way home we stopped at the Westway Diner on 9th Avenue for a chocolate milk shake and a side of fries, cheese cake and, still thinking of the show, a cup of tea. As we paid the check I noticed a sign on the wall behind the cash register worthy of Lake Wobegon. With only the slightest exaggeration it read: 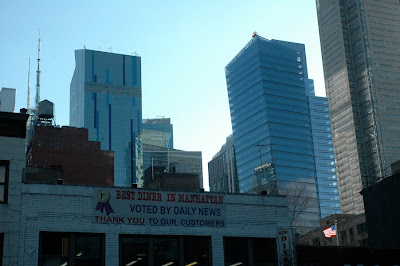