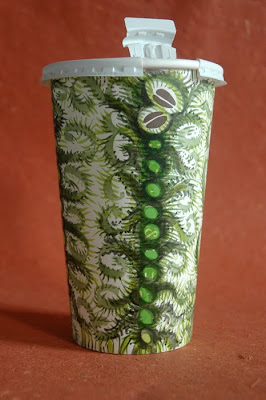 Cup of the Day #26
by Gwyneth Leech, 2010
Colored India ink on white cup
from Bean & Bean
I was walking home from the studio in the pouring rain the other day and passed one of my local deli-men. He was carrying an umbrella and wearing a black and white satchel over his shoulder - a 2010 Census satchel! He has embarked on a new, temporary career going door to door chasing up non-responders.

I was in his shoes at the beginning of April, although it wasn't door-to-door then, but a matter of waiting outside soup kitchens and shelters for the intensive shelter-based enumeration at the start of the census period. We trained at Truro college in Lower Manhattan - hundreds of us all at once, spending long days in windowless rooms going methodically through handbooks. This was not a job to be taken lightly, even though our crew leader, Lisa Kaplan, a stand-up comedienne by profession, did her dry best to make it palatable. At the training our group of 30 or so included under-employed singers, actors, writers and artists, some of whom I already knew from around my neighborhood or from my choral singing job.

Lunch breaks were a highlight of the training and Bean and Bean, at 71 Broadway, a pleasant discovery. They are an all-organic coffee bar and roast their beans right on the spot. You can see the Digital Roaster, the Pro 2500, sitting in shiny glory in a glass-walled room at the back of the shop. It made me feel quite confident about the expensive product I carried away with me.

Once training was complete, the actual enumeration job involved traveling to multiple sites around the city, long waits, false starts, lots of paperwork and some heart ache, but all the information is confidential and I can't share any of the stories I heard on threat of imprisonment or fine. However, I can say that the wind blew, rain lashed down and enumeration forms turned to mush as we tried to fill them in while counting people outside several famous sites, such as the McAuley Water Street Mission, the Salvation Army on 14th Street and the Bowery Mission - which lives up to it's knock-about reputation despite the shiny presence of the New Museum literally two doors away.

I saw a cluster of enumerators on a stoop up the block yesterday. I stopped to commiserate. How many times do they have to come back to any given apartment if they get no response? Six times. That's a lot of leg work!

So give them a break - if you still haven't filled in that census form, do it now. 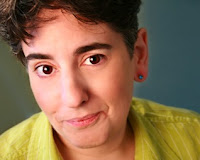