Making Art in the Park 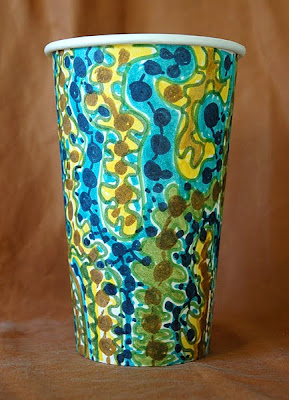 Cup of the Day #24
by Gwyneth Leech, 2009
Colored India Ink on White Cardboard cup
I was in Bryant Park last week when seven ladies in bright yellow dresses were striding, stamping, limping and strolling around on top of a big yellow box. Together they made up an installation by the artist Kate Gilmore called Walk the Walk. I stood underneath for awhile listening to the satisfying drum roll of their foot steps, then I walked back to take in the scene from a distance. Surprisingly, the yellow was not all that jarring. It was bright, like a bed of daffodils, but blended in nicely with the new green of the London Plane trees which made a backdrop to the performers.

I took some photos and background details began pop to my attention: a woman carrying a yellow shopping bag, a man in a yellow polo shirt, the yellow sign on the Pax coffee bar on the corner, and the yellow-green sleeves on the coffee cups from the 'Witchcraft kiosk in the park - all created variations on the centerpiece.

Kate Gilmore herself was there, talking to the art bloggers Barry Hoggard and James Wagner, and I joined them for a chat. The big question was, how do the performers get up and down? Kate showed us a ladder leaning against a tree. The performers were allowed breaks as required during their hours-long shifts. Kate was cheerful and clearly having a good time - watching from ground level, but standing in solidarity with the marching maidens, despite the profusion of little French folding chairs scattered everywhere in Bryant Park.

It has been a busy week, she said, I help the girls up and down, people keep coming by, I enjoy watching - then I go do some business in a coffee shop. Now there's a woman after my own heart!

A few days later the endlessly walking women, the box and the ladder were all gone without a trace - in the end, just a fleeting interjection into the daily life of the city. 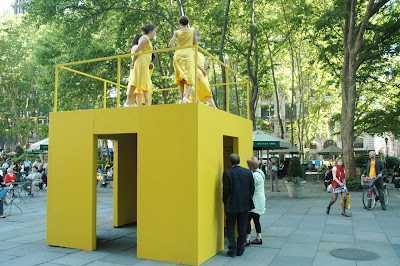 Walk the Walk by Kate Gilmore
Bryant Park, May 2010
Posted by Gwyneth Leech at 9:16 AM