Afternoon Tea With Julie Andrews: The Sing-Along Sound of Music


Pity our neighbor, the filmmaker Angelo Guglielmo; our younger daughter’s favorite show is the Sound of Music. Almost every morning, the CD goes on and she joins in with gusto. I keep turning down the volume, but she loves to belt “Climb Every Mountain” with the abbess. He must hear it through the apartment wall.

Indeed. That’s why he phoned the other day to ask if we knew about the Sing-Along Sound of Music coming up for one night only at the AMC 25 Cinema on 42nd Street. “You have never been?” he exclaimed. “Gracie will LOVE it. I have done it a bunch of times. It’s a real thing. You will see”. So there we were at 6PM on a school night, doing homework in the back row of the AMC, and getting ready the afternoon tea we had smuggled in her Hannah Montana backpack, my large Celestial Seasonings English Tea from the deli miraculously unspilled.

I have a particular affection for the Sound of Music. Aside from the fact that it is a nearly flawless movie in every way, as a teenager I spent a summer month in the grand mansion that is the Captain’s movie abode, a real historic house called Schloss Leopoldskrön outside Salzburg. My dad, a law professor and a lover of travel, had co-founded a global faculty for the study of international corporate and market law and the Schloss was the site of that year’s Summer Seminar. He was teaching with the family in tow. So I can tell you with great authority - The gazebo was built for the movie, but the grand entrance, the golden ballroom, the terrace and lawns, statues, lake and stunning mountain view – all real.

And here, for the first time since I was a kid, I was going to see the movie on the wide screen. People packed into the theater buzzing with excitement, some in costume (here a nun, there a Black Shirt). We heaved a collective sigh when the first misty views of the Alps came on the screen. Then, as the tiny figure of Maria is seen coming over the saddle of an alpine meadow, orange letters popped onto the screen and every last one of us burst into song.

Well, it wasn’t all that tuneful, especially Grace’s contribution, but we sang every last song and chorus. The audience cheered, clapped and laughed in all the right places. Each arch expression and Machiavellian maneuver of the baroness’ received their hissing scorn, as did the Nazi bad guys. And the addition of a misplaced quote or whistle from the audience added an unexpected layer of hilarity.

In a happy daze at 10PM, we walked home in the company of new friends: a little girl and her mother who sat next to us during the movie, the girl a child actress up from Florida for a Broadway audition. Home-schooling with her mom, the Sing-Along Sound of Music was her homework that night.

As I was tucking Grace into bed, I asked her which was her favorite scene.
“When the kids hide in the lobby,” she replied without hesitation.
You mean in the big house?
“No, in the lobby,” she repeated indignantly.
Oh, I get it. Grace has no idea idea what an abbey is. But, true New Yorker, she has seen plenty of lobbies! 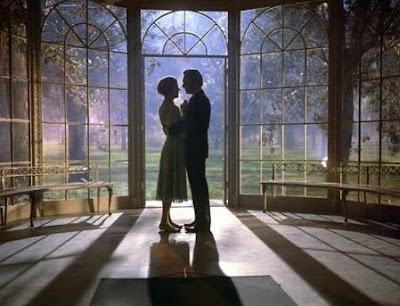 Captain and Maria in the Gazebo. Sigh.
The Sound of Music, 1965
Celebrating the 45th anniversary, 2010

Posted by Gwyneth Leech at 7:05 AM