The Halloween candy hangover has pretty much worn off, replaced by a political kind, but the high holiday of New York City costume designers deserves to be noted all the same. 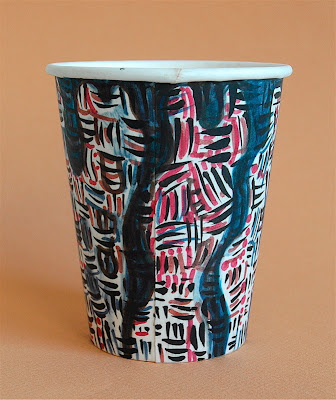 The Saturday before Halloween, I was warming a bench in Hell's Kitchen Park, a cup of afternoon tea from the deli in hand and a swarm of small kids in costume around me. It was the annual Halloween Party hosted by the 47th Street Block Association.
A Central Park carriage horse patiently plodded around the block pulling a squirming cargo of kids in a hay wagon, police cars fore and aft. Grace had had her turn, petted the horse's nose and was now on the loose in the playground with her Nikon Coolpix camera recording rather than take part in a halloween parade.


She fired off a great shot of fellow PS 51 parents William Ryall and David Brooks, at their knee level. They were dressed as creepy Nasa scientists, escorting their daughter who was dressed as a purple space alien. William, a fine dancer and veteran Broadway performer opening soon in Anything Goes and David, costume designer for ABC's One Life to Live, were jointly responsible for the family  ensemble. 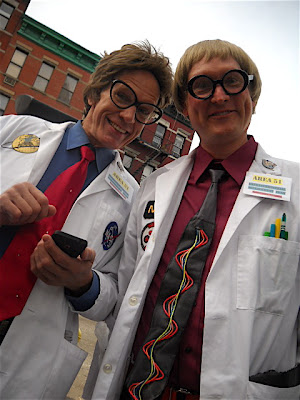 Halloween is a sacred holiday for my costume designer sister Kitty Leech who arrived in the afternoon of the day itself laden with armloads of glamour that have been in the works since July. My older daughter was Helen of Troy, escorting Grace as a small mermaid. I agreed to be a Sea Queen. Our diaphanous garb was a chilly affair as we set out trick-or-treating in the 9th Avenue shops, but definitely no coats allowed.

Sometimes we go the full distance and take to the streets of Greenwich Village, enjoying the skills of the city's designers and artists on full view in the annual Village Halloween Parade. This year we just made it as far as Manhattan Plaza, twin apartment towers of subsidized housing for the city performing artists, where a cornucopia of candy and haunted houses was to be found.

A highlight of the weekend was a trip to the theater.
Saturday, Kitty scored us free tickets for the Gypsy Run of Elf at the Hirschfield Theater on 45th Street - the preview attended by friends, family and broadway colleagues. We strolled over to the theater after dinner and collected the tickets at the stage door from Kitty's long time friend and colleague, Gregg Barnes, the show's costume designer. The line stretched down the block and Kitty, who recently celebrated 30 years in New York City, greeted a slew of fellow designers as we took our place at the end, waiting for the doors to open.

Several hours later, we emerged all jazzed up by a torrent of glittering costumes, gags and snowflakes. That is one entertaining Christmas show! Christmas? did I just say that? Please, not yet. Halloween may be past, but I fully intend to linger in Harvest mode for a few weeks more. 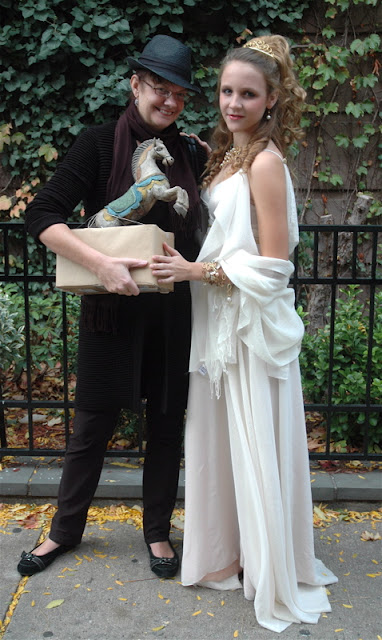