Wednesday was meant to be a Snow Day. The private schools got one, but in the end the public schools stayed open. Thus, the lines of children trudged along the slushy sidewalks, rather despondent dark figures against still-crisp snow banks as the garbage trucks fitted with plows made their way up 10th Avenue. 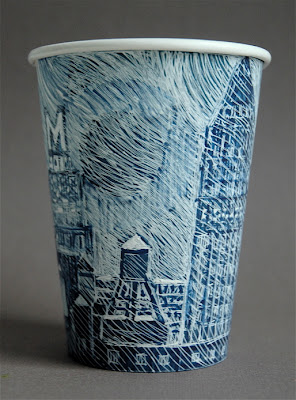 Cup of the Day #60
Blizzard in Midtown by Gwyneth Leech
Gel pen and brush pen on Blue and white printed cup, 2011

It was rather lovely early on, each tree branch and building-ledge trimmed in white. I had been looking forward to a day sledding in Central Park. But you can't do that if you don't have a kid with you, can you?

I decided that the Not-a-Snow-Day was actually a reprieve and I headed early to the painting studio, so early that it was still time for breakfast. My husband and I stopped in Buongiorno Espresso Bar, a sweet little Italian coffee bar opened just a year ago. The owner, Liliana, is Greek but the house coffee beans are imported directly from a roaster in Italy and the crisp croissants are baked on the premises. We settled onto stools at the window counter, our very authentic Italian china cups bright in the morning sun streaming in from the West. 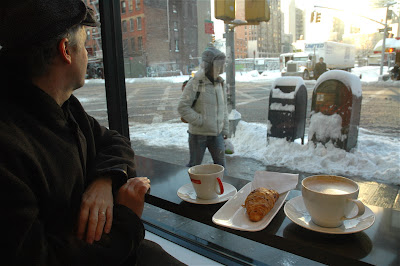 Wait a minute - how is the sun streaming in from the West at 8:30AM?

Only because it is bouncing with laser-like intensity from a new glass tower over on 10th Avenue. Weird, but we could almost feel heat in it!

9:00 am saw me in the studio embarking on what turned into a five-hour session, painting high contrast abstractions from the snow-edged panorama outside my window.

Going home I detoured along 48th Street past the Clinton Community Garden. On the other side of the tall black fence the beds and shrubberies were shrouded in white, clean and still. At any time of the year it gives me a thrill to turn my key in the gate and walk in, stepping out of the city into a parallel place. I tried to catch that feeling in a video short I did a few years ago, shot during another January snowfall. The music of Martha Sullivan caught just the right mood and it was a pleasure to find it and watch it again today.

Posted by Gwyneth Leech at 8:14 AM