Upcycled, Curated by Barbara Lubliner, and the Cup Lid Dilemma 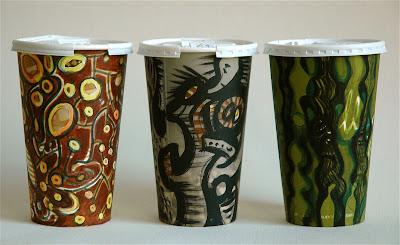 I just came back from another look at "Upcycled" a sculpture exhibition curated by Barbara Lubliner, at the Educational Alliance, 197 East Broadway, on through thursday January 20th. Back in December, I wrote about the opening which was packed, and I wanted a closer look. The ground floor Rubenstien gallery is open 9am -9pm so if you are reading this before or on the 20th, there is still time to enjoy a very attractive and thought-provoking exhibition. Attractive because the material used by the artists is brightly-colored, toy-like and expertly manipulated. Thought-provoking because that material is scavenged post-consumer plastic trash, or plastic pollution as the current awareness-raising movement wants us to understand it.

Being an Upcyler myself, I respond positively to the aestheics of the artwork by Olivia Kaufman-Rovira, Bernard Klevickas, Barbara Lubliner Shari Mendelson, Janet Nolan, Ilene Sunshine, and Tyrome Tripoli.  At the same time, consider that even if every artist in the United States decided to turn our post-consumer waste into art, we would probably not make a dent in the avalanche of this stuff being thrown away on a daily basis. Rather we should look for a future when the waste reduction movement has rendered these plastics rare and precious, deserving of their jewel-like colors. 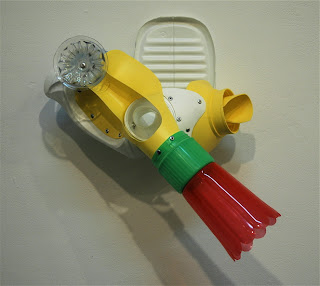 In the meantime, I especially admired the construction of Bernard Klevickas' small wall artworks, of Barbara Lubliner's plastic bottle geometries and of Janet Nolan's Cancan installation. I know what they had to contend with. Back in the 1980s, while living in Scotland, I had a sea-borne plastic-detritus period (as opposed to my current paper cup period where the only plastic I tussle with is in the lids). I took a truck out to a small town on the West coast one day and within a few hours had filled it full with a huge quantity of the simlarly colorful yet repulsive plastic material. In my case, it had all been washed up by the waves: fishing nets, boxes, floats, water bottles, tool parts, domestic objects and broken pieces of unidentifiable things. 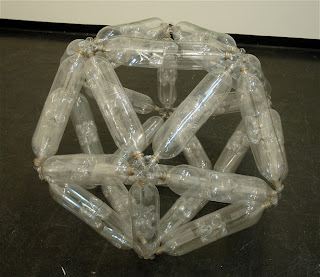 Back in the studio, I discovered that these plastics were beastly to work with. Nothing would stick to the surfaces and no glue would hold them together. Eventually, I used a hot glue gun, essentially melting pieces together, until I learned that melting plastic creates toxic fumes. No, I will not endanger my health for the sake of an artworkl! So, in the end I bound, piled and tangled all this stuff together into frenzied installations studded with video monitors that I exhibited until I could bear the sight and smell of the plastic no longer. Terrifying to think how much more plastic there is in the ecosphere now than there was those twenty-some years ago!

Back to the present, the neat riveting in Bernard's work, the wire-reinforced plastic straw connectors of Janet's wall piece, and the hinges cut from plastic bottle bottoms holding Barbara's shapes together are all ingenious, glue-free and completely satisfying solutions.

Leaving at 4 o'clock I stopped by Café Petisco across the street from the Alliance for a cuppa. There, I thoroughly enjoyed tea in a contraption which, with care, can be safely reused for thousands of years: an earthernware mug. And if you sit in, no plastic lid is required. 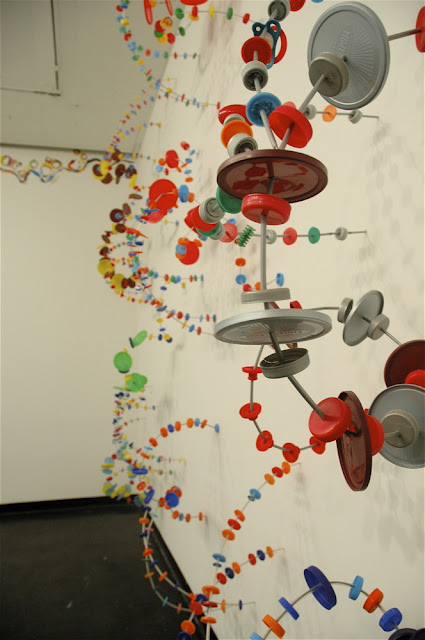 Posted by Gwyneth Leech at 9:47 PM