Just About the Worst Cup of Tea

I have been going out to Barbara Ellmann's studio in Long Island City
a lot over the last few weeks. She is facilitating the long-term preservation of my cup drawings through an encaustic process. 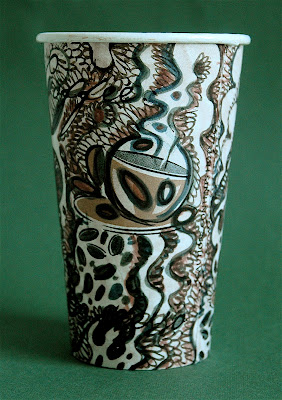 
I stand by her giant west facing windows all day, dipping cups in a molten solution of beeswax and Damar varnish. Then I slowly fuse the surface of each cup with a heat gun. Slow is not my usual way, so I have been learning to be more methodical and careful as I go, gently heating the wax surface rather than overheating and causing the wax to run right off the cup.

Barbara has a lot of tables in her studio because she teaches workshops for R & F, the encaustic paint manufacturer, on a regular basis. It has been wonderful to have the space to spread out the cups, and to walk around and see them in different lights. I began to stack them into tall structures the other day, tantilizingly totemic towers of ornamentation. This opens a whole window on scuplture!

I will be installing the massed cup exhibition in just over a month, so I am pressing on with treating the nearly 300 cups I have so far. A few more days should see the job accomplished. 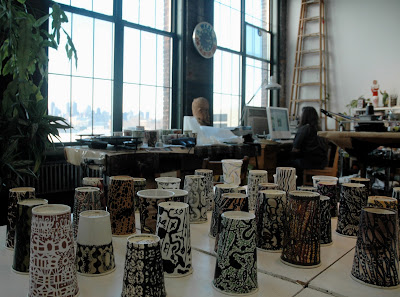 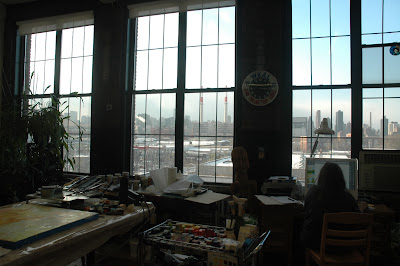 The trip out to Barbara's studio on the N train is full of interest. Emerging above ground just before Queensborough Plaza, the train ascends along curving tracks that wind through the neighborhood, providing close views of water towers and the graffitied upper reaches of warehouses. From the elevated platfrom at 39th Ave-Beebe I descend a long narrow flight of stairs, and walk a few blocks to her studio. On 39th Avenue a new vista spreads before me across Long Island City to Manhattan, dominated by the red and white striped stacks of a power plant they call Big Alice.

There are a few small delis and bodegas along the way. I have tried each one but have found neither good coffee nor good tea. It is Litpon tea bag territory, served everywhere in the same thin blue and yellow patterned paper cup. The Lipton is bearable if two teabags are used, but getting exactly what I want in a deli-land of little English has proved difficult. Yesterday, already inside the studio, I took my first sip to discover that instead of two tea bags, milk, no sugar it was one tea bag, no milk and two sugars! Sugar in my tea was a bitter disappointment. But Barbara's electric tea kettle and her stash of Chai tea bags saved the day. 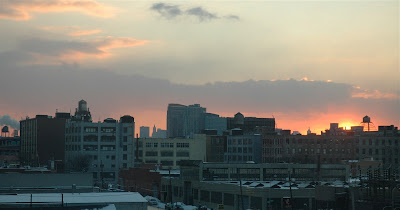 Posted by Gwyneth Leech at 8:53 AM