I gave a talk about my artwork over the weekend. After seeing a photograph of my drawings on cups, a man said to me, "Does this project have an environmental message? I hope not."
I was surprised, given that he is a science teacher.
"Only in the nicest possible way," I replied. 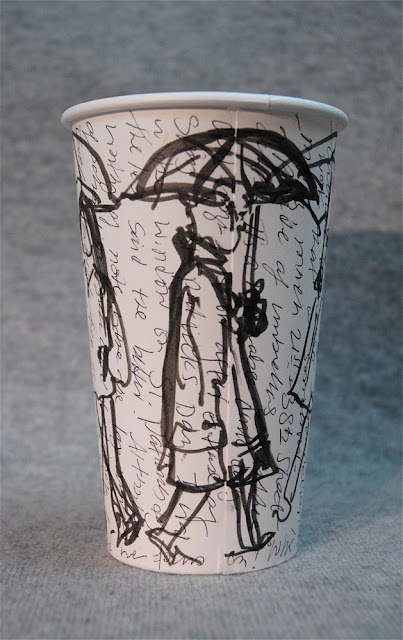 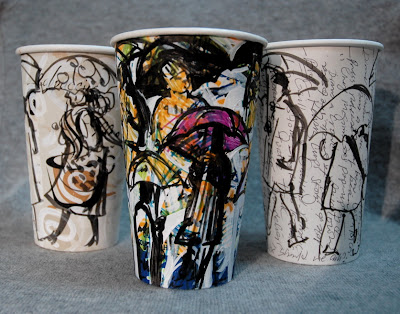 It is hard not to think about issues of over-consumption and consumer waste when surrounded by the results of my own small, daily act of buying hot drinks to go for over a year. Nearly 400 single use paper coffee cups is a lot to look at. I am now hyper-aware of the coffee cups I see everywhere in the city and know they aren't heading to recyling, but to landfills where they don't decompose because of their pesky polyethelene lining, the lining which allows them to hold hot drinks. 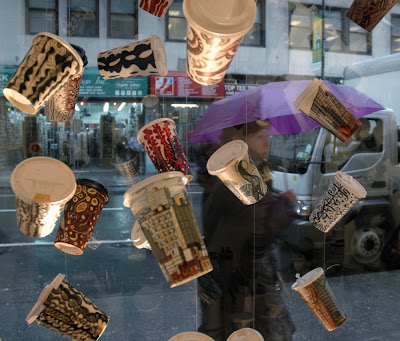 View from the Hypergraphia window
March 21, 2011

Yet I have grown fond of the sturdy paper cup. It has a history. Someone invented it in 1907, in my home state of Pennsylvania no less. And it even intersects with my family story, having first been used commercially on the Lackawanna and Western Railway. My great grandfather Alfred Fowler McCollum worked for Lackawanna at that very time, and since he was an inventor, I can imagine him being instrumental in the switch from communal water dippers to the newfangled but hygienic paper cup. 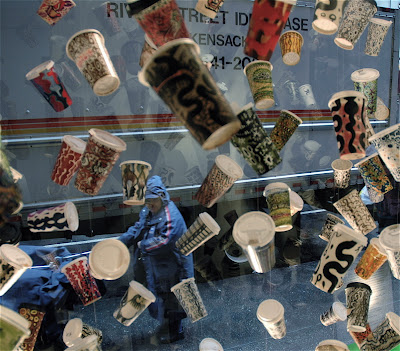 View from the Hypergraphia window
March 21, 2011

I decide that the least I can do is reuse some of my unadorned empties. One cup should last a few dozen times (not a patch on the travel mug which can be reused thousands of times, but I am not tempted to draw on those, yet). On the first attempt, at the deli, they take my proffered paper cup, throw it away and fill a new one. The second time, at Empire Coffee and Tea Company on 9th Avenue I specify reuse. They fill without comment, but give me a new plastic lid and coffee sleeve. All I need is another plastic lid! The third time I am at Guy and Gaillard on 38th. I ask for a cup of tea and hold out my empty paper cup. The man reaches under the counter and pulls out a new one.
"Please reuse my empty one," I say, still holding out my cup.
"Oh no," he says, "That's a cheap cup. No good. We have better cups, expensive - good plastic lining!"
He fills it and hands it over.
What can I do? I take yet another cup, pay and head out the door. View from the Hypergraphia window
March 19, 2011