Drawn to Coffee Cups: the Complexities of Keeping it Simple 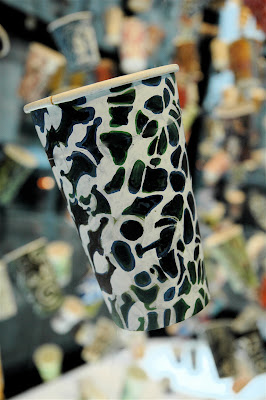 Numerous people have remarked at how simple the idea of Hypergraphia is - drawing on paper cups and hanging them up. My reply is, "it has taken me 30 years to get this simple!"

Hypergraphia is not my first go round with upcycling - I was doing it as a young artist living in Scotland. Then it involved collecting truck loads of plastic detritus from beaches and making them into sculpture. (That was in the days before digital photos. Where the heck did I store those slides?)

Now the paper coffee cup says it all. But how did I get there? 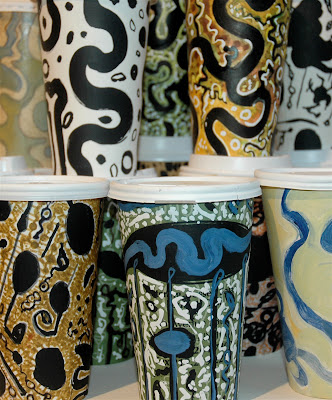 In 1999 I moved to New York City. Let's face it, New York can be a tough town for artists. There is so much stimulation, so many museums and art exhibts to see, so many other artists working here, not to mention the roiling sea of the art market that can buffet a person every which way. In the midst of all that it is easy to lose your sense of self and your visual compass.

To counter these currents I decided years ago to keep it local and keep it simple. I would paint portraits of my friends and their families. I did this happily until the complexities of commissions and the fraught politics of representation began to wear. Family portraits were not straightforward after all! 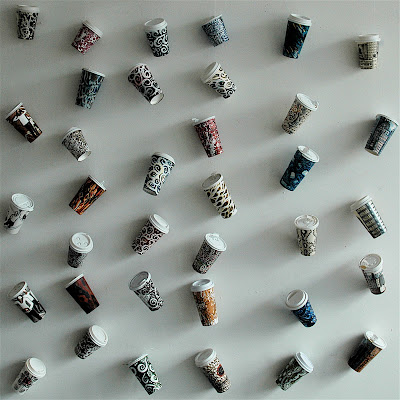 I became interested in a local landscape, of tidal salt marshes along the coast of New Jersey, utterly familar to me from years of summers at the shore. It is the aerial view that intrigues me, first seen via Google Earth. The meandering streams and waterways look elemental, like the circulatory system of the body. Google Earth wasn't enough. I had to see it up close - first from boats, then planes. But it is not so easy to cage a lift on a small plane. Then back in the studio I struggled to get it down on large canvases, my ideas outstripping my time, my resources and my storage space. 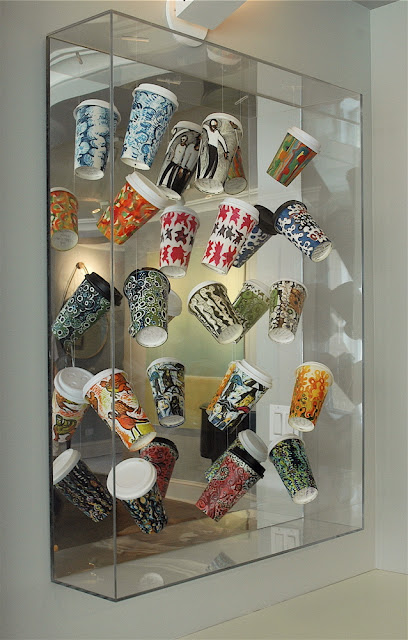 Cup Collection
in museum display box with mirrored back
July 2011

Finally, I started to pay close attention to my coffee cups which, in a casual way, had become the locus of an ever expanding lexicon of drawing and painting ideas, including abstractions based on those salt marshes. Started at meetings some four years ago, when paper replaced styrofoam, my image-making-on-cups habit had grown and grown, from stacks in my studio to a small window exhibit on 38th Street, and now to the Prow of the Flatiron Building where I will be drawing and adding new cups to the installation through February 18th, 2012.
I may even have 1000 drawn cups by then! 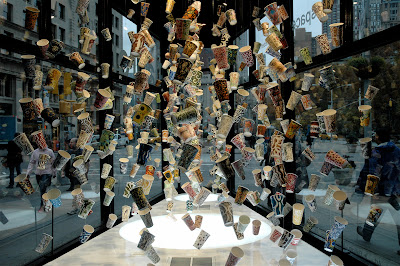 The exhibiting of the cups has presented its own complexities. I recently found pages of notes brainstorming the installation. I imagined elaborate ways of weighting the cups involving collections of personal items, household objects and even playground sand. Display ideas discussed were shelves, racks, pedestals. Finally the exhibit's curator, Cheryl McGinnis said she saw the cups "hanging every which way" which led to the breakthrough solution - loops on a line. Many different kinds of materials later, I alighted on the perfect weight of mono-filament and just the right kind of loop, reliably knotted yet imprecise enough to orient the cups pleasingly in all directions.

Thus, after many meanders and through a process of trial and error, the seemingly uncomplicated and organic Hypergraphia installation came into being. 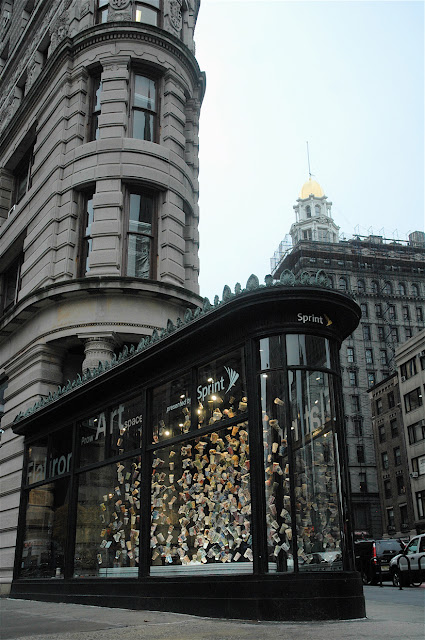 Recently I calculated that Hypergraphia, the Cup Installation has been featured on over 75 web publications and blogs, including articles in Japanese, Portuguese, Chinese, Korean, Russian, Turkish, French, Arabic and Macedonian!

All this from the simple paper coffee cup held in the palm of my hand!

Posted by Gwyneth Leech at 5:19 PM