Season's Greetings from DVF and the Full Brew

"Where on earth did you get that dress??" I exclaimed the minute Rachel walked through the door for rehearsal a few weeks ago. She was wearing an exquisitely cut, sleeveless cocktail dress in Sienna brown, patterned with bright white brushmarks, each with a dropped shadow beneath. If one of my painted cups had walked through the door, this is how it would look. 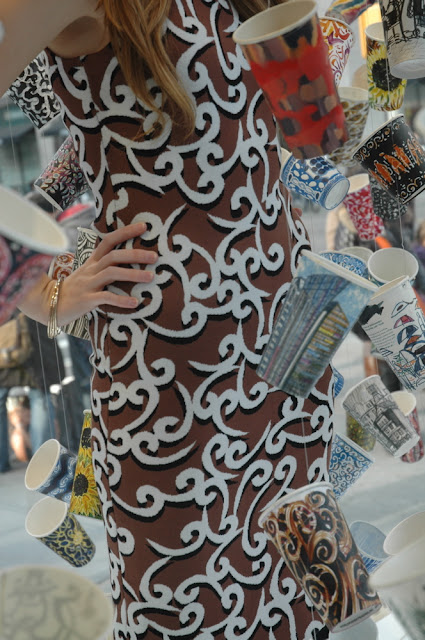 
Rachel Farrar is one of my all time favorite people; a collegial choral singer, wonderful soloist, fun person with a terrific eye for fashion. She is making her way in New York City as an extra for film and television and has great tales to tell of location shoots, actors and directors. She is a self-proclaimed  "proud member of the Screen Actors' Guild". Beyond all that, she has successfully helped me shop for clothes, which makes her a very special person. I am a famously poor shopper; I just have no stamina. 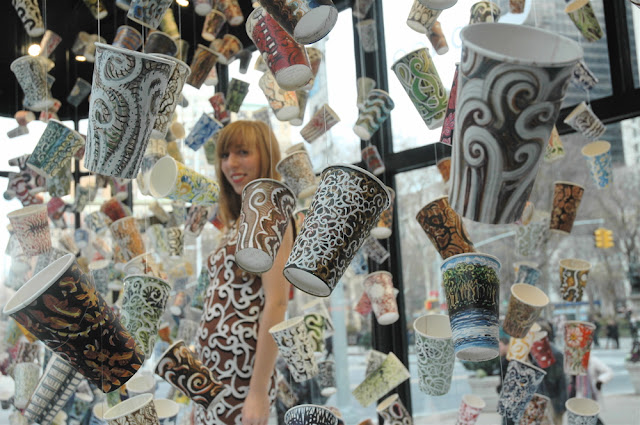 "You have to come to the Flatiron and wander through the cup installation wearing that!" I told her. She agreed to stop by.

In a pleasing turn of the circle, I was in Soho recently on my way to see my friend, Yvette Cohen's exhibition of shaped paintings at Cassina on Wooster Street. Right next door I was stopped in my tracks by a window full of inverted coffee cups, arranged into a Chrismas tree. A nice effect. DVF? Diane Von Furstenberg again! Art, coffee cups, fashion. It's official - paper coffee cups are cool! 
DVF finally "met" my hand painted coffee cups a few days ago when Rachel did make it to the Flatiron Prow on her way to a Christmas party, wearing That Dress. She threaded her way happily in and out of the cup strands while I took photos from every conceivable angle, from both inside and out, having a high fashion New York moment which was shared by at least a dozen photographers who clustered round the windows. I wonder where those shots will turn up? 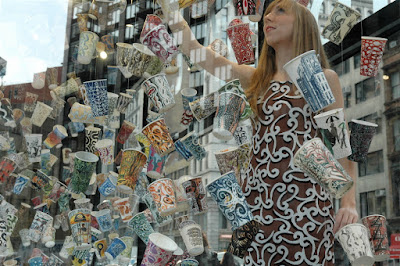 When I got home there was an e-mail from another friend attaching a photo of Diane Von Furstenberg's 57th Street window. The coffee cup Christmas tree again.
"DVF meets coffee", she wrote. "Have you seen this?" 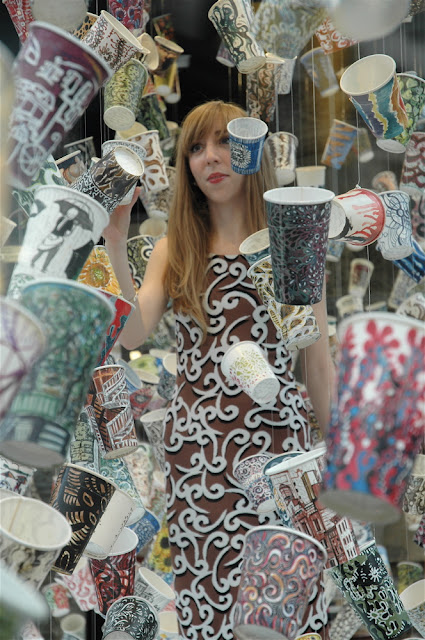 The Full Brew wishes everyone a Merry Christmas. I will be back drawing in the window Tuesdays through Saturdays, 11 am - 2 pm, from December 27th until February 18th, 2012.

Posted by Gwyneth Leech at 9:54 AM