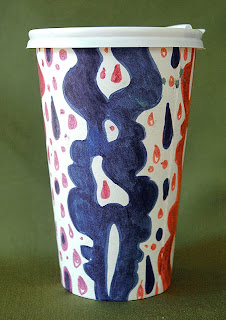 Cup of Day #8
India ink brush pens on white cardboard cup
by Gwyneth Leech, 2008
At 9:45 AM this morning, Friday March 19th, my husband David Wilson forswore allegiance to any foreign prince or potentate and along with 172 people from 54 countries became a newly minted citizen of the United States. Being a good (ex)Scot he says he will be glad never to sing "God Save the Queen" again. During the oath of allegiance I note that they are all swearing to perform armed service should they be required by law. Hmm. Did we know about that part?

My 14 year old daughter Megan is there too, making her late for school - but what better lesson in civics for her humanities class? She is a dual citizen - U.S. and U. K. And my sister Kitty, ever ready with costume details, supplies a flag lapel pin.

After the brief ceremony and the handing out of those critical naturalization certificates we emerge into Federal Plaza in downtown Manhattan looking for sustenance. We find an excellent breakfast spot at Jerry's Cafe on Chambers Street a few blocks away and drink Americano coffee with our bacon and eggs.

Finally, we can breathe a sigh of relief and get over the nagging fear that in this post 9-11 world, somehow, someday our resident alien spouse and father could be deported without right of return. Now he is a citizen that can't happen, right? Next, make sure we get the U.S. passport in hand. 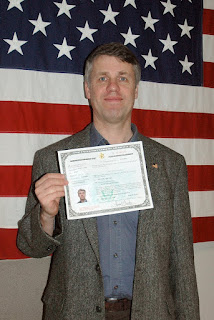