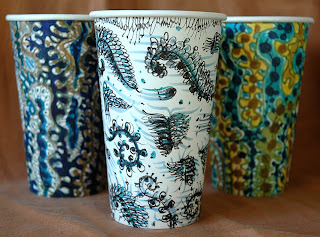 Cup of the Day #3
Brush pens on white cups
from Amy's Bread
(English Breakfast Tea with milk)
Drawn in the studio
2009
Broke off my preparations for showing at Pool Art Fair to swing by the Armory Show preview at piers 92 and 94 last night. Much big hair and eventful outfits in the festive throng. Some art leaving the building in bubble wrap - a good omen. Went round every inch in my high heels. Could hardly walk this morning. I never wear heels. Now I remember why.

Here's my shopping list: Both of those tiny works on paper by Antony Gormley and the photo of Marina Abramovic's gold flecked face, both at Sean Kelly gallery, and a Nick Cave suit from Jack Shainman gallery. Over on the secondary market pier I will take several of the Morandi paintings and all three Emile Nolde water colors. Nice to see Callum Innes' immaculate half color-field reductive paintings in several of the contemporary galleries (a shout-out to Callum. We did our graduate studies together at Edinburgh College some years back) but too big for my New York apartment, I fear. And that blue Anish Kapoor is a dream but I can just see my six year old literally falling into it.

But never mind the art. Let's talk about something we can afford. The coffee they are selling on site won't kill you, and the small selections of teas aren't Lipton, but really you should venture off campus. Sure the immediate environs are a desert, but boldly walk East on 52 Street to 10th and try the delightful La Bergamote Patisserie for a gleaming espresso machine and eye-popping french pastry. Even better,  go one more block south and hit Cafe Forant on 51st between 10th and 9th. Great coffee, small selection of nice tea. Chef Lea Forant's brunch is out this world (yes to the Croque Madame) as is Carolyn Montogomery's conversation. In her own right, Carolyn is a splendid cabaret artist and a person to know. Oh, and they serve lavander lemonade all year round. An awesome concoction.

From Armory to MOMA at 9 PM for the benefit party. A press of multicultural glitterati in mostly black. Our ears were assaulted by dirge-like music from several art bands (what was that all about?) but our eyes dazzled by Sean Capone's gignatic projections of slowly morphing floral fields on the walls of the atrium.


MOMA has awesome coffee and great tea in any one of its cafes, but last night all were closed. Refreshment was provided by several huge open bars but the only coffee on offer was in the William Kentridge exhibition where to my delight the artist draws with coffee in several short films and in the grand finale of another sends his cafetiere as a rocket ship to the moon. 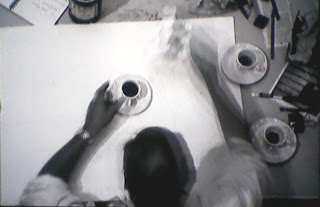 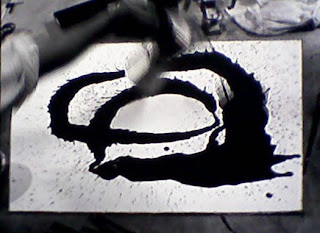