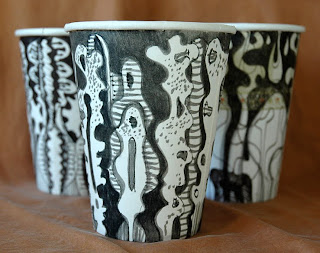 Cup of the Day #9
India ink on white cardboard cups
by Gwyneth Leech, 2008 & 2009
Throughout the month of March there was an ongoing forum down at Edward Winkleman Gallery in Chelsea on artists' relationship to the art market. This was the brainchild of Jennifer Dalton and William Powhida whose drawings filled a rear room "market place".  In the main gallery the walls had become chalkboards, tables and chairs filled the space and people gathered every day for classes run by artists, gallerists, writers, bloggers and others about topics of pressing interest. The project was called Hashtagclass after the hashtag symbol ( (# ) used to precede words on Twitter in order to find and follow live discussions. Remote participants were a feature of the month with the talks viewable live via webcam and people using text and Twitter to send in questions during classes.

One afternoon last week I was there for Social Media #Class run by artists  Zachary Adam Cohen and Mark Philip Venema  streaming in from Canada as a disembodied head on a screen on the wall directly behind Zachary. The room was full of artists, bloggers, a critic or two and a dealer or two - all known to me through the media of Facebook but many of the faces I was seeing in the flesh for the first time.

The talk covered Facebook, Twitter and blogging with Zachary reading a prepared text and the jovial head making sardonic interjections. The discussion boiled down to several points - social media has a great leveling effect and is creating new communities in the art world. We all agreed. But what do those communities mean? Are they real relationships? Do they exist outside the web? Do they create real access and opportunities?

A key component of community was identified as trust and a call went out to name critical elements of trust relationships. Zachary asked for Twitter questions and flying fingers in the room passed along the message via IPhones and Blackberries.

I was feeling pretty dry as the talking and texting went on. Bottles of wine had appeared and been circulated but that was of no interest to me. Suddenly on the large screen, a woman and child entered the room and handed something to the Canadian artist. Moments later he was lifting it to his lips - a large steaming mug of a hot drink! My mouth watered. "What are you drinking?" I called out to him via microphone across the digital void. "Tea with milk, in a mug from the dollar store",  he replied, taking another big swig.

Now here is the crux of it - in this mediated world he can be in the room with us and in a foreign country at the same time, but we can't pour each other a cup of real tea!

At the end of the talk I made it a point to go around the room and meet all those mediated people, all those facebook friends and Tweeters and shake their flesh and blood hands. I am grateful to Edward, Jennifer and William for making a big step towards getting that community off their computers, out of their offices and studios and face to face in the real world. And I hope somehow to drink real tea with Mark Philip Venema before too long. 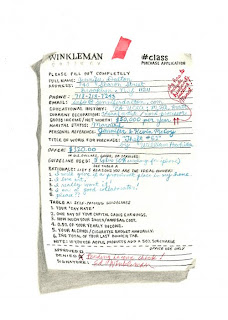