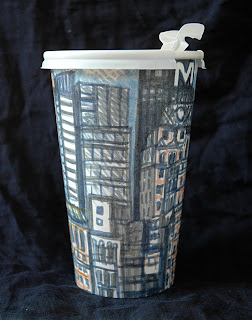 Cup of the Day #6
Midtown Cup by Gwyneth Leech
India Ink brush pen on cardboard cup
2009
At last, I was back in the studio painting yesterday. However, I had to break off early to collect my six year old daughter from school and take her in a taxi back to the Garment District to meet my sister for a photo shoot. Kitty Leech is a costume designer and illustrator. She lives in Brooklyn, teaches at NYU and designs off-Broadway shows. Some years ago we had the thrill of going to London to see her costumes in the West End production of "Gross Indecency - the Three Trials of Oscar Wilde".

On the domestic front, Kitty has for years done a phenomenal job of creating lavish costumes for my girls for Halloween. Megan, my eldest, has worn a long series of royal costumes including Marie Antoinette, Cleopatra, Queen Victoria at her coronation, the Snow Queen and 2009's ethereal Queen of the Night.

Last Halloween, Grace, now six, was Mary Poppins and Kitty wants a studio portrait for the archives. So here we are in Midtown in the studio of Barry Burns, photographer. Grace submits to full make up and costume. But the giant steam radiator is hissing and we are all melting when Grace finally gets in front of the lights with carpet bag and parrot-head umbrella lifted high while Barry shoots away, lights flashing. Five - yes 5! - minutes later Grace says "all done" and starts getting out of her costume as fast as she can. Persuasion, entreaties and bribes are useless. 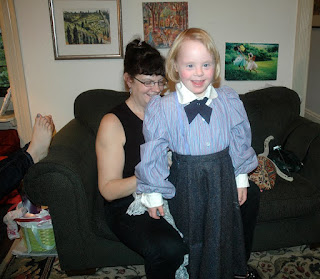 Sister Kitty dressing Grace as Mary Poppins
for Halloween, 2009
But Barry has got some great shots. And all is not quite over. Grace insists on doing MY hair and makeup and then we go in front of the camera together. One more round with me and my sister, under Grace's direction - two parrot head umbrellas this time - and in all we have a great photo shoot.

While waiting for proofs Kitty recollects the genesis of her coffee habit. When she was three years old, she would sit on the lap of our adored, white-haired Great Aunt Martha, who would feed her black coffee sweetened with sugar from a silver spoon. Kitty was hooked for life.  She says I drank the same elixir, but I don't remember it. I swear I never drank coffee until college.

Kitty is a Starbucks gal and has saved a very large quantity of cups for me to draw on. But she indulges my taste when we emerge into the neighborhood of button shops and fabric emporia. We sample New York Lunchbox on 36th between 7th and 8th, a Kosher family business open less than a year. We admire the green glass wall tiles and the dark blue ceiling and Grace enjoys two orders of Sushi, but the espresso machine is broken  and the brewed Lavazza coffee tepid.

We try again closer to home, turning in at New York Gourmet Marketplace on the corner of 43rd and 8th (no website!). Grace sits down in the window right next to a man in MTA uniform. He is wearing the largest digital wristwatch I have ever seen and is diligently writing numbers in a notebook as he  checks the time-keeping of buses going up 8th avenue. Grace is fascinated by the crackle from his two way radio.

This spotless eatery is another family-run business, open since September, and caters largely to Times Square tourists.  My decaf latte comes from one of those pre-programmed machines which the New York Times coffee article decried, but it is delicious to me at the end of a complicated afternoon. Grace wants to know how my coffee is. I consider giving her a taste. Instead I try the frozen yogurt which she is offering me on a plastic spoon. 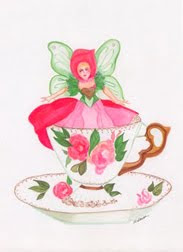 Guest Cup of the Day
Rose Teacup Fairy by Kitty Leech
Gouache on paper
Posted by Gwyneth Leech at 10:55 AM