How to Collect Art: Starting Small


Anyone can be an art collector, as demonstrated by the following story: 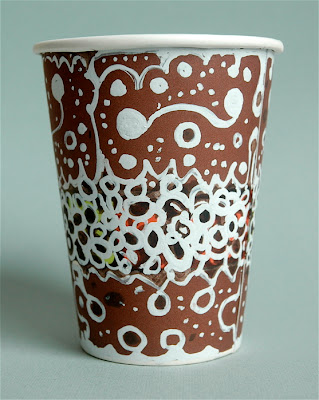 I was at the Container Sore in Chelsea the other day, dithering over how to display several of my coffee cup drawings which will debut in a group show,  Eat/Art at Atlantic Gallery opening on November 30th.
I was at the back, surreptitiously removing some display items from an attractive clear acrylic corner shelf with a rounded front, and trying out my cup drawings for effect. Lovely. Perfect!

I went in search of a customer service rep who could hunt up stock.
Paul was happy to oblige, and returning a few minutes later with three shelves, he asked me what I planned to be putting on the them, thinking of weights, screw, and wall types.
"These," I replied, and lined up six cup drawings on a display table.

"Nice!" he said, examining one closely. "Reminds me of my mother's friend in Queens who made a million bucks manufacturing paper coffee cups. You know, that Greek kind - We Are Happy To Serve You."
Was her friend, Leslie Buck the man who designed the Anthora cup and who passed away recently?
"I don't think so. I believe it was the guy who printed and distributed them. They were everywhere at one time. My mother used to tell me, you can make a living in a myriad ways; If you find out everything there is to know about a thing, the world will beat a path to your door."

Looking at my cups led Paul to another story. "I have been in New York City all my life - well since I was four. Back in the 1980's I bought a piece of matchbook art, covered in a graffiti design. Bought it from a graffiti artist in Washington Square. Tag name was SAMO. He turned up not long after in art galleries:  Jean Michel Basquiat.

Jean-Michel Basquiat! The young art star who shot so brightly across the New York '80s scene and came to a tragic end at the age of 27. One of his paintings sold for over $14 million at Sotheby's in 2007. I would love to see that matchbook!

"I picked up a Keith Haring back then too, and some pieces by other graffiti guys. They were selling them on the street and I loved the art they were making. I still have those paintings."

As I headed to the cashier, I asked Paul if he has a secret vocation.
"Not really," he said. "I do like to talk to people, which I can do in this job."
"Oh," he added, "and I have a pretty great art collection."

Moral of the story: buy it because you love it. 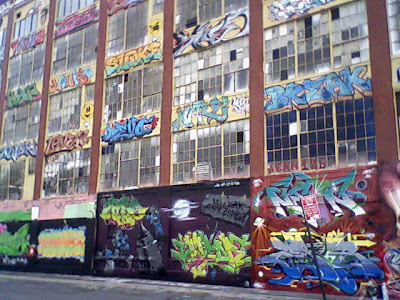 Graffiti Art lives on
at 5Pointz
The ever evolving graffiti museum in Queens, NY

some websites where you can find quality artists to follow:

Don't hesitate to contact directly artists whose work you like and ask where they are exhibiting or how you can see their work in person! Artists will be happy to add you to their mailing lists for upcoming shows and open studio events.