There was dire and somewhat funereal news from Crain's Business this week in an article called Artists Fleeing the City. It paints a depressing picture of a future New York City with no practicing artists, turned into a shopping-mall art center showcasing only artists from out of town. 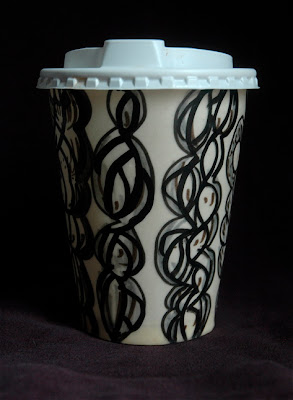 It is true that the cost of living is high and buyers scarce. Yes, the city has gentrified and those derelict neighborhoods which artists have so successfully pioneered are few and far between. Long commutes and job juggling are exhausting realities for many and can surely interfere with the regular and high level production of artwork. Consider my portfolio of paid jobs since coming to the City: university teacher of digital movie-making, professional choral singer, portrait painter, maker of commissioned videos for artists, census worker, music librarian, writer, movie extra and, last but not least, exhibiting painter (yes, even some commercial gallery shows and art sales).

But this is the sentence that lost me:  "Though the nation's bulk of the art galleries are still here, artists and other creative workers say the feeling of community that used to exist in New York is gone, and with it the spark that fueled ideas".

Really? They must be living in a different city from mine.  I can't go anywhere around New York City without falling over artists I consider part of my community. These are not just visual artists, but choreographers and dancers, writers, video artists, actors and musicians of many stripes. And none have plans to move. Yes, we complain and we do talk about real estate a lot, but the exchange of art ideas continues to be vigorous and fruitful and fueled by the unique character of the city. We just have to keep thinking broadly, creatively - and collaboratively to get the best out of this town.

Back in the 1950's, what was the New York art world? Fifty men hanging out in the Cedar Tavern and  five art galleries galleries to show in. Now it is thousands upon thousands of us, of all races and both genders, crossing paths in every neighborhood. And what is the secret to hanging on, staying motivated and keeping the artwork flowing? Strength in numbers: getting together in groups large and small to drink coffee, pool our resources and share what we know. I do this literally, several times a month. Generosity is the key, and despite its cut-throat reputation, New York City artists are the most generous people I know.

Yes, times are tough and money is tight - but the abundance is real. 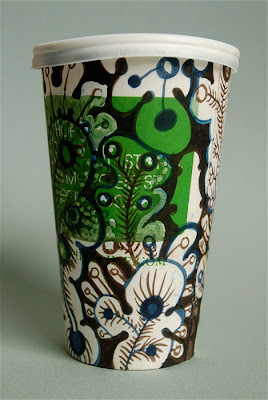 Cup of the Day #47
Burgeoning, by Gwyneth Leech 2010
India ink on white and green printed cup