A Very Choral Christmas and a Hot Cup of Chai

By all accounts, my paternal grandmother Margaret and her sister Mary had wonderful singing voices. The daughters of Scottish and Welsh farming folk in Bloomington Indiana, they were much in demand singing duets at public and private events and as choral singers in the Baptist church. In turn, Dad was in the church choir in Ambler, Pennsylvania as a boy. I never heard a thing about that, but the junior choir medals still lie sedately in his velvet-lined display box next to the WWII medals and the Phi Beta Kappa key. 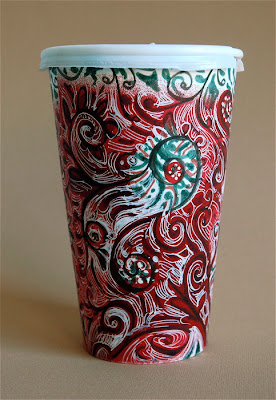 When my sister and I were respectively 9 and 11, annoyed with our Saturday morning marathons of TV cartoon-watching and resulting bad humor, dad signed us up for junior choir at an Episcopal church in our neighborhood in Philadelphia. I have been in church choirs ever since. It is an interesting view from the choir stalls: making the music, being part of the show, keeping one's counsel on matters ecclesiastical. Grandma used to say, "if there is trouble in the church, it started in the choir". Hmm.

I now sing in the professional choir at Saint Bart's Church on Park Avenue and 50th Street here in New York City, as does my husband, a baritone. We met in an Edinburgh University club in my Scottish art school days  - yes, it was a choir - and we have been singing together since.

So what attracts a painter to choral singing? It is social, my job is clearly defined and finite, I am just a part in a big machine, I don't have to make the decisions, and when the job is done there is no artifact to store (except of course, my paper coffee cup) What is not to love? It is the perfect day job for a visual artist.

A while back I was talking to one of the singers and he told me he was taking classes at the Art Students League.
"Good for you," I said.
"Yeah," he replied. "This singing business is too hard. I decided to become a painter. It will be easier to make money".
Wow. Well good luck with that!

If anybody needs me over the next three days I will be at Saint Bart's, and at Saint Bart's, and at Saint Bart's singing Christmas services. I hate to say it, but the marathon will be fueled by Starbucks because there is no place else close enough to dash to between services or that is open on Christmas Day in the Morning. I will play it safe and eschew the coffee in favor of grande cups of Tazo chai tea which always put me in a festive mood. And if I didn't tackle at least some of those red Starbucks holiday cups I wouldn't be living in the world, now would I? 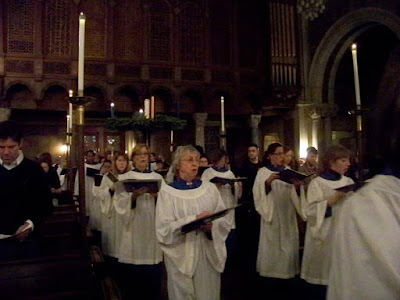 Click here to see the schedule of Christmas services at Saint Bart's and join us for candlelight, gorgeous choral music (if I do say so myself) and probably some incense thrown in. Grandma would hate the smells and bells but she would be pleased that I stuck with the family business.

Posted by Gwyneth Leech at 9:00 AM