In Search of SoHo: What's Up on Wooster

I was on my way to Pearl River Mart, a large Chinese emporium on Broadway a few blocks up from Canal, in search of paper and bamboo blinds to replace ones in my apartment ruined by a leaky window frame. 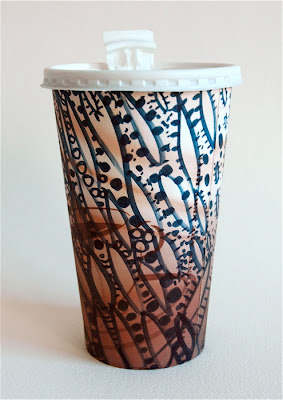 Exiting the subway train on Canal I decided, as one does, that I needed a tube of Viridian Green oil paint, so I detoured through the China-town throngs to SoHo Art Supply on Wooster. Despite enormous temptation (I love art supplies) I bought only the one tube, then emerged a bit nostalgically into what was the heart of the NYC '80s art scene to discover that, well, it is still bustling down there with art and artists.

Across the street the joint was jumping at the Levi's Photo Workshop. This huge pop-up studio is completely free and one can only gawk at the digital and analog equipment available for walk-in use until December 18th: cameras, lighting kits, Apple computers, large Kodak printers and more. Go and play before it closes!

Also on Wooster were an Art Production Fund pop-up gallery, the Drawing Center , and the new Team Gallery, under construction and set to open in May 2011. After checking out Artists Space a block away, I began feeling a touch weak at the knees and I was on the look-out for coffee.
Ah, Le Pain Quotidien, just around the corner on Grand Street. I bought a small latte and a minute lemon tart topped with a raspberry and sat outside on a bench for a minute in the sun. I opened the white paper bag and carefully removed the lemon tart. It gleamed like a jewel. I couldn't just eat  it - I had to photograph it first with my cell phone.

Oh no, the woman at the other end of the bench is watching me.
"You see," I explained, "I blog about art and coffee."
"Really?" She sounded interested. "Only visual artists?"
"All kinds - costume designers, dancers, musicians."
"In that case, here is a card for my most recent performance, Right this Minute."
I registered her name, Leslie Satin.
And on the list of performers, Ted Johnson.
Wait, I know him! He was a principal dancer in Imprints on the Landscape, a piece about coal-mining and my artist grandfather choreographed by my Aunt Martha Wittman for the Liz Lerman Dance Exchange.
In fact, my daughter Megan, then 10, danced duets with him in the Washington DC premiere in 2007.
Do you know Liz Lerman Dance Exchange and Martha Wittman?
"Yes and yes!" she replied, "and I have known Ted for years."

From small pastry to small world moment in the turn of a head! 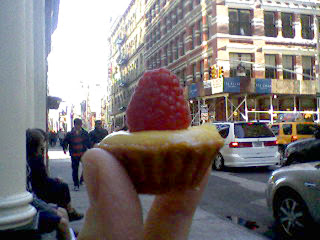 And yes, I found the blinds at Pearl River on my way home.

Posted by Gwyneth Leech at 9:51 AM