How to Juggle Art and Life: A Day Out with Barbara Ellmann 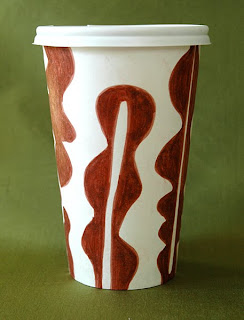 Cup of the Day #14
Red Sienna Cup by Gwyneth Leech
India ink on white cardboard cup, 2009
Lipton tea company has upped its game. I am in the cafeteria at Adelphi University in Garden City, Long Island. I note a rack of Lipton tea bags in a variety of new and promising flavors. I try the chai black and it is actually strong and full of flavor. A change from the floor sweepings that make up their usual tea bags!

I am out here today with New York artists Ellen Stavistsky and Barbara Ellmann because Barbara has a solo show on in the Ruth S. Harley University Center Gallery, called Foreign Affairs and other Abstractions. The exhibition features three densely hung groups of her accomplished and colorful encaustic paintings.

The largest series, double hung, comprises compositions based on ethnic fabrics from around the world and the eye plays across a riot of patterns, creating new relationships along the way. The cool greens and blues of a second series evoke topography and were done after a recent artist residency in Florida.

The final group, of 50 waxed drawings hung in a grid, had me mesmerized. A product of daily practice, and using Parcheesi boards as a long-ago starting point, each pattern and color arrangement is different, as are the subtle tones of the Japanese paper she works on. The longer one looks the more one sees as each image relates without repeating. 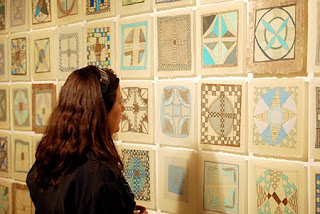 Foreign Affairs and other Abstractions
Adelphi University
March 30th - April 15th, 2010
Barbara never ceases to amaze me. Not only is she in her studio painting regularly, she works as a museum educator at MOMA and with Lincoln Center Institute. She teaches encaustic workshops for R&F,  the encaustic paint manufacturers, and she devotes a good chunk of her time on a monthly basis to leading and galvanizing a large number of New York City artists into sharing business information amongst themselves. Her living principal is the more you give out the more comes back. On top of this, she has raised and launched a son, now at art school himself in California. She is an inspiration!

Foreign Affairs and other Abstractions is on through this Thursday, April 15th, open every day 11Am - 8PM. If you don't catch it there you can travel out to Brooklyn to see her commissioned glass panels at the Van Siclen Avenue subway stop (an MTA Arts for Transit commission), or the permanent installation of her encaustic panel paintings at the Cambria Heights Branch Library in Queens. Even better, take an encaustic workshop with her, bookable here through R&F. It looks like there is one coming up in June. 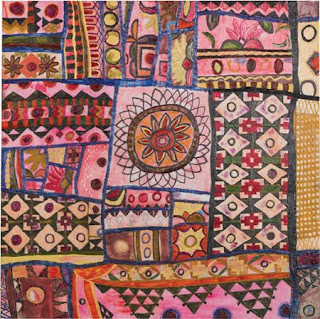