New Yorkers are always in a rush, on a schedule, trying to fit in too many things in a city where everything is too far apart. So how to explain the attraction here of Christian Marclay's the Clock, a video projection made up of time-marking moments from thousands of films and TV shows... with a running time of 24 hours!? 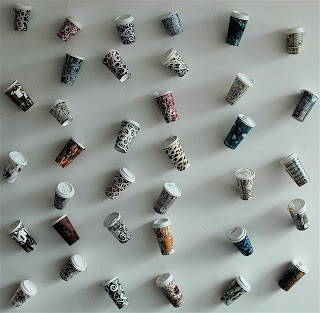 Cups of the Day #71
Wall of coffee cup drawings
by Gwyneth Leech
10:00 AM in the studio
It played at Paul Cooper Gallery for five weeks. Two days before it closed an article appeared in the New York Times and suddenly the lines were hours long to get in. I decided I couldn't bear to spend more time in the line than I did watching the film, so, since I had left it to the last 24 hour screening, I went in the middle of the night. When I woke at 4:30AM last Saturday in the grip of my usual anxieties I thought, "what the heck, I'll go to Chelsea". I dressed in the dark, sneaked out of the apartment without waking the family and hopped a cab to 21st Street.

I joined a short line, made up of some people ending their night, others beginning their day. We talked about the movie and its meaning, swapped stories of why we had left it so late to come and generally built a bond of camaraderie in the cold night air. I enjoyed the chat and was almost sorry when 20 minutes later I was ushered inside to take the place of someone who had baled. 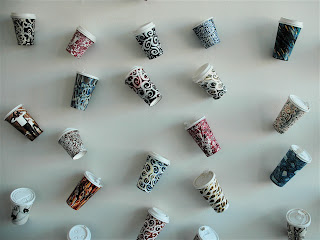 Wall of Cups
by Gwyneth Leech
10:25 AM in the studio

There, along with hundreds of other viewers, I found myself quickly drawn into a weird world of sleepers, waking dreamers, lovers, workers, families, all hermetically sealed inside their endless movie. The conventions of time compression are turned upside down as the banal, dramatic, suspenseful or funny time marking devices expand into a huge, seamless, kaleidoscopic almost-narrative. The whole is a clock marking real time. The video is a triumph of vision and sound editing, a hyper-tribute to the beauty of the movies, and a time collage of beloved actors aging, growing young and aging again.

In the three hour segment I watched, hundreds of screen people woke up to clocks and alarms of all descriptions (who knew there was so many ways to wake up - some funny, some amorous, some murderous?). Between 6:30 and 8:00 AM, at first intermittently, then with ever increasing frequency, breakfasts flickered across the screen - toast popping, bacon sizzling, coffee brewing, coffee pouring, coffee being drunk. Finally, I could stand it no more - I fled to find my own.

Outside, I was surprised that it was broad daylight, and was struck by the long vistas of the empty streets after so many close ups. Climbing the stairs to my apartment, I felt disoriented by the smell of bacon - my husband was making a movie breakfast, and greeted we with a kiss on the cheek. Life mirrors art mirrors life. The time was 8:15AM. 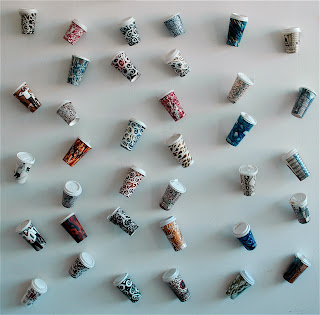