Fear of Shopping: Upstairs at Bergdorf's


On a whim, I entered Bergdorf's on 5th Avenue the other day and went upstairs. I look at the windows regularly, never miss them a Christmas. But inside I have not been above the luxury-packed ground floor for decades. I felt a little breathless as I ascended the narrow escalator. 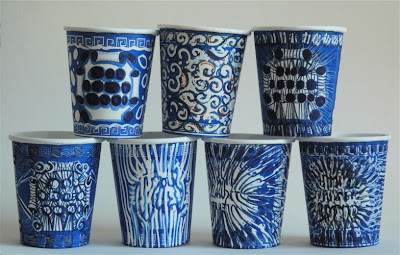 Cup of the Day #68
Tower of Modified Greek Cups
by Gwyneth Leech
White-out, India ink and encaustic on
blue and white printed cups

The last, and only other time I was uspstairs in Bergdorf's was on a
day trip from Philadelphia with my mother and older sister. I was no more than 13. We came up several times a year to go to MOMA and galleries on 57th Street.

My mother loved beautiful department stores and saved up her money to buy lovely clothes that lasted for decades - classic pieces chosen with an unerrlng eye. In Philadelphia, if she could, she shopped at Bonwit Teller or John Wanamaker's. In New York City we only looked at things: art in museums, big buildings, shop windows. Maybe we bought lunch. On this day, after MOMA, we were up 5th Avenue looking in the windows at Bergdorf's, and the dresses were breathtaking - long, silk, simple Empire lines, but exquisitely hand-painted. Mother studied them, absorbed and suddenly we were inside and up the escalator to Dresses on the 2nd floor.

We were ushered to a dressing room and a sales assistant carried in several of the dresses we had seen in the window. Up close, they were even more beautiful. I don't remember the designer, but I vividly recall the feel of the peach-colored silk and the intricate painted patterns.

"Wow, mom, you will look great in those!" I exclaimed.

The assistant stood there, holding the dresses. She made no signs to leave, and suddenly I understood - she was going to dress me!

I was engulfed in deep mortification.
My mother waited, my sister waited, the assistant waited.
There was nothing for it. Off came my clothes to reveal JC Penny's undergarments - mismatched, old and full of runs. This was worse than being hit by a bus!

The sales assistant was impassive. My mother and sister didn't look at me. Over my head went the dress, and the buttons were fastened. Then it was my sister's turn. She, of course, had on her best underclothes.

Clad in floor length gowns, we stood there in front of the mirror, transformed into fashion plates.

How much are they? my mother asked.

I was frozen with fear. How would we ever get out of this store?

With unruffled calm, my mother said, "Well, I have to ask their father first. Do you have a card?"

A few minutes later we were in our own clothes and walking briskly down the street. "Mom, what are you going to do?" I asked, consumed with anxiety. She said nothing.

A few blocks away she stopped at a pay phone. Was she actually going to call dad and ask? She dropped in coins and dialed.

"I regret that their father says no," was all she said before hanging up.

My sister's face filled with genuine disappointment. I felt a surge of relief and admiration; who knew my mother could be so cool under pressure!

"Well girls," she said turning to us with a smile, "shall we go get a cup of tea?" 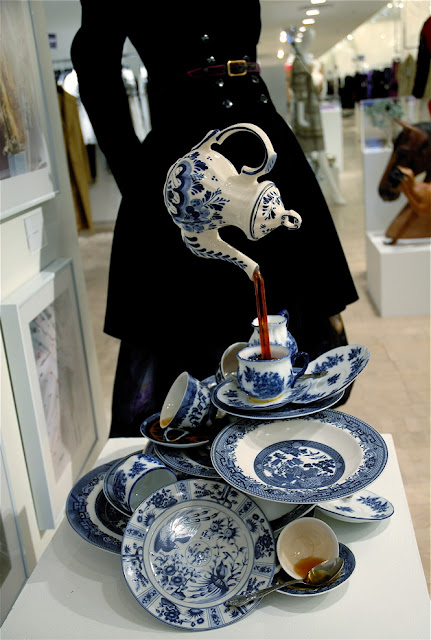 Posted by Gwyneth Leech at 8:07 AM