I can't remember a winter like this. It has just been snow on snow on snow since the end of December. They say global warming is at fault: more moisture in the Arctic from melting ice, greater snowfall on Siberia with colder air above changing the patterns of the Jet Stream which in turn is dumping snow more frequently in weird places. There is only one thing to do - buy sleds. 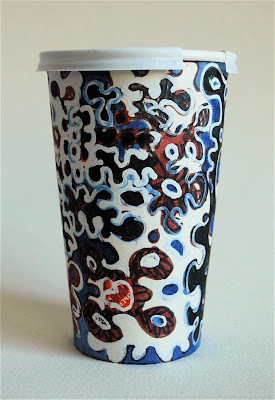 On a trip to Philadelphia in the post-Christmas blizzard we did that, picking up a couple of the plastic disk variety from a local hardware store. We used them for a day and then, although they cost just $7 each, I brought them back to New York City on the train. At the time it seemed annoying and absurd as I maneuvered them onto the overhead rack, but try buying a sled in New York City when you want one!

Days and days of snow have fully justified the effort and we have been up to Central Park numerous times to spin down the slopes. I noticed that other people are equipping themselves too and we see fewer impromptu sledders using cardboard boxes or trash bags. 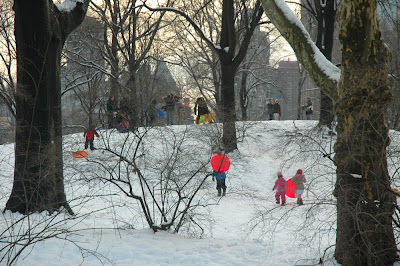 The problem with sledding is the wipe-outs and that moment when suddenly you are wet and cold. My youngest suddenly stopped having fun on Monday and we had to exit the Park quickly looking for lunch.

Cafe Frida is just one block from the park on Columbus opposite the Museum of Natural History. We sat in the window, staving off the gray and white exterior with a welter of red walls, pink cushions and orange curtains. The food was fresh and brightly-colored and the coffee a real treat.
My daughter was delighted with the warmth, the colors and the food. Settling back against the cushions, she declared, "this is where I live!" And when it was time to gather up our sleds and leave we had to carry her, protesting, out the door. 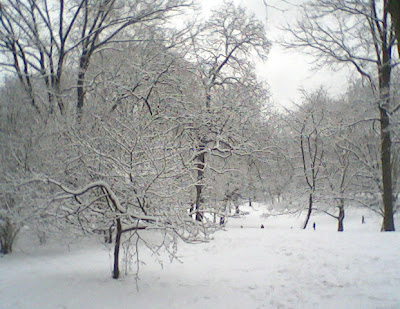 Posted by Gwyneth Leech at 1:21 PM