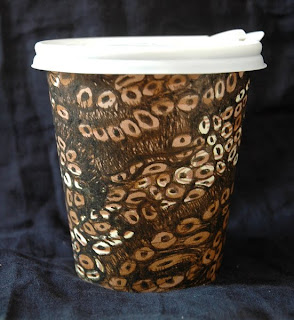 Cup of the Day #19
Small Coffeebean Cup by Gwyneth Leech
India ink on brown cup, 2009
Not long ago I gathered with several other artists, writers, an actor and a musician to sort through some dirt. Literally.

We are the composting committee at Clinton Community Garden and we were opening up last year's compost bins. Soon a heaping wheelbarrow full of rich black organic material stood before us, surprisingly odorless and rich in the promise of fertile garden plots to come. We sorted through by the spadeful, removing avocado pits, corn cobs, little paper labels, stones, twigs and other dross that hadn't broken down. Then the precious compost was decanted into tubs ready for distribution.

In the process of shoveling and sorting I learned that egg shells, coffee grounds and tea leaves are all worth their weight in composting gold. Rich in nitrogen (and calcium for egg shells) they make superb fertilizer for a garden or planter and can be used directly on the soil, without needing to be broken down. Who knew?

On the other hand, the left-over honey comb from the garden's hive emerged these many months later as an undigested horror and had to be hidden inside a bucket for someone braver to deal with.

I have a plot here, about the size of a single bed, among a hundred such beds intensively and lovingly tended by us nature-starved city dwellers. I was on the waiting list for eight years before our family name came up. The plot has had many prior owners in the thirty year history of the garden so it has delighted me this Spring with a succession of surprises: daffodils, hearty tulips, sprays of violets and now a rich display of what I think of as Scottish blue bells. Wild hyacinth really. They carpet the woods near Glasgow in May and David and I used to trek out to see them anually when we lived there.

On these Spring mornings in New York City I like to come early and sit cross-legged on the brick path in front of my little plot, drink my morning tea from a cardboard cup and let my mind wander to woods and gardens far away. 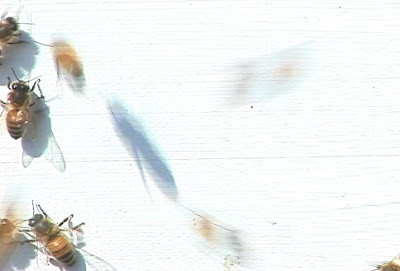 Video still
Apis Millifera by Gwyneth Leech, 2008
with music by Martha Sullivan
taped in the Clinton Community Garden
View on Youtube here
Posted by Gwyneth Leech at 6:00 AM