How to Find A Great Cup of Coffee on 10th Avenue 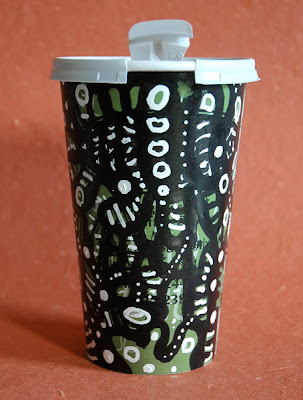 Cup of the Day #19
by Gwyneth Leech, 2010
Sumi ink and white-out pen on green printed cup
"Excuse me, is there a Starbucks on 10th Avenue?" This question from a bearded young man on the corner of 10th Avenue and 46th Street. Now that I think about it, I do not believe there is a Starbucks between 14th Street and 70th Street, practically the whole length of the Avenue. I direct him to several on 9th, but he is not satisfied with the need to leave 10th.

"Why don't you try Bis.Co. Latte?", I suggest. It is a half block from where we stand. Run by Holly DeSantis who lives right across the street from her shop, it has a full espresso bar serving Illy coffee and she bakes a wildly original selection of biscotti on the premises.  It isn't cheap, but neither is Starbucks. Plus, they serve the coffee in a china cup. If it's tea you want, they serve it in an attractive tea pot and matching cup.

"But is it a good place to read?"  Read! they have a bookshelf and magazine rack. You can read all day.

We parted ways and I walked two blocks to collect my daughter from school. On our way past Bis.Co. Latte a half hour later he was there seated at a table, coffee cup at his elbow, engrossed in a book.

We went to the playground to join the tumult of after school play. Grace ran off to swing on the monkey bars and I sat down next to my friend, Carolyn Montgomery - cabaret singer, mom, raconteur and woman with her finger on the pulse. She and her wife Lea have an excellent little bistro on 51st Street called Café Forant which I wrote about in a earlier post here.
We chatted about life, art, elementary school, the weather. It was a gray day of drifting petals from the flowering trees.
"You know,' she  said, "it was such a chilly day, I brought a bag of lattes with me to the playground".
I reacted in surprise. "Starbucks?"
"No, from the cafe. I just made up four lattes and brought them in a bag in case someone wanted a latte. Sometimes it's just nice to be able to say, do you want a latte?"
"And are they all gone?" I asked, laughing.
"Of course, I knew there would be at least four sleep-deprived mothers here."
How right she always is!

So if you are looking for good coffee on 10th in Hell's Kitchen, there is Bis.Co. Latte, Cafe Lali (for a great Spanish coffee), La Bergamote and Café Forant, to get you started. But, don't forget to check the playground at 10th and 47th. You might get lucky, especially if you look tired. 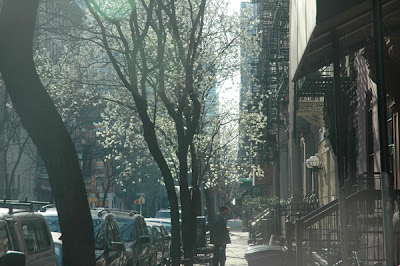 Spring morning in Hell's Kitchen
April 2010
Posted by Gwyneth Leech at 6:00 AM