I am imagining Louise Eshleman McCollum and her sister, Mrs. Edith Eshleman Peacock taking tea together in Louise's drawing room in Bloomsburg, Pennsylvania. It is the 1920's but I see them still in stays, voluminous dark dresses, and Mrs. Peacock must be wearing a large hat with a dead bird pinned on top. The table is laid with a crisp, monogrammed linen cloth and the china is fine white, with a gold rim and monogrammed too. The tea is poured out from a heavy silver pot. 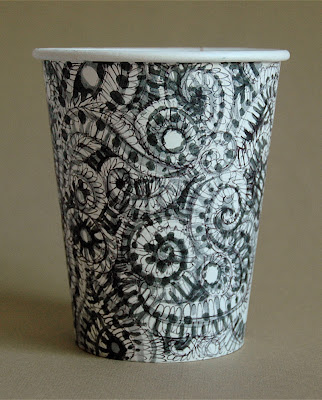 Louise's husband, Alfred Fowler McCollum is an inventor / mechanical engineer and self-made man. He is descended from a long line of Scottish-Americans going back to rebel John McCollum of Argyll, who was thrillingly banished from Scotland to New Jersey in 1685 for his part in an uprising against King James II. Two revolutionary soldiers grace her husband's family tree.

For her own part, Louise has a family of whom to be deeply proud. Her father, Benjamin Eshleman operated a coal mine and was a Civil War veteran. Her mother, Elizabeth Pott Eshleman bore 15 children, of whom 13 have lived to be adults, including the sister Edith who sits across from her.

But above all, it is her Grandfather Abraham Pott of whom we think: founder of the town of Port Carbon, PA, pioneer industrialist who was famous for finding coal veins, the first to figure out how to burn anthracite in a stove, used it to run the first steam engine in Schyulkill County, built a canal, invented coal car mechanisms and built a railway from studying one in a book, never having seen such a thing in real life. He was born in 1799 and lived to be 96, his life spanning the whole Industrial Revolution.

Before him were three full generations of John Potts - all in the iron business and more Revolutionary War soldiers - descendants of Willhem Pott who arrived in Philadelphia in 1734. And to ice the cake, all these fine men of action and industry - husband, father and fore-fathers - were Free Masons right back to 17th Century Britain. 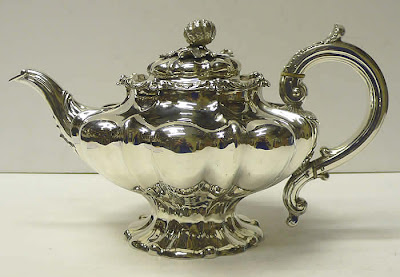 So now I am back to imagining that afternoon tea in Bloomsburg. The ladies are not happy. In fact, they are disconsolate. Years ago, Alfred had decided that each of their three daughters would receive higher education. Elizabeth, the eldest, attended the Normal School in Bloomsburg and trained to be a kindergarten music teacher. Martha, middle daughter, went off to Philadelphia to nursing college.

And the youngest, Katherine was allowed to go to art school! The School of industrial Design in Philadelphia. What did she do there? She bobbed her hair, donned a racoon coat and became a Flapper. And now a letter has arrived announcing her marriage to Michael Gallagher - a fellow art student - in a City Hall wedding!! Yes, you heard the name correctly - Michael Gallagher, Irish. Even worse, he is the son of a coal miner - not a coal prospector like Grandpa Abraham, not a coal mine operator like daddy Eshleman - but the son of an immigrant Irish pitman. And how can it be, that into this family of staunch Free Masonry should come a Roman Catholic? This is what comes of over-educating young women!

I can only imagine how much worse the ladies are going to feel when the first baby - my mother Louise - arrives at full term, several months too soon.

It cannot be said that the rift was ever really healed. Katherine and Michael Gallagher, the young artists, managed to be independent, lived on their wits and their skills as illustrators, and had friends who helped them find jobs and places to live. They never left Philadelphia and they never spoke of the past. My mother recalls that her grandfather Alfred McCollum was generous, and had sent the newlyweds dark heavy furniture to fill their home. But of the nature and opinions of my great-grandmother Louise and all of the 12 great-great-aunts and uncles, I can only guess. 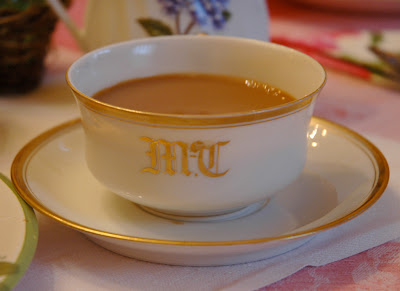 Porcelain service, with McCollum monogram
from the house in Bloomsburg, Pennsylvania
Family collection

Posted by Gwyneth Leech at 8:28 AM