The Artist is Present - Proceed with caution 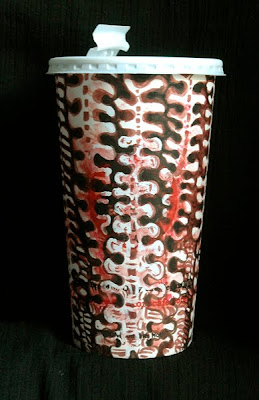 Cup of the Day #13
Bone Cup by Gwyneth Leech
India ink and white-out pen
on white cardboard cup, 2010
There is a lot of pain and suffering going on right now at the Museum of Modern Art.

First, there was the excruciating crush of people waiting to get into the galleries first thing in the morning, most drawn by Marina Abramovic's show the Artist is Present. Then there was the gray and stricken face of Marina herself, in only her second face-off with a visitor that day, locking eyes across the hard wooden table in the atrium where she is sitting on a chair for 70 days, motionless, all day long. She is almost a month into the show and this is clearly a monumental feat of endurance.

I am there with my daughter Grace, age six, and we are cross-legged on the floor just outside the white tape which delineates a large empty space around Marina and her table and chairs. Grace is absorbed in the view of Marina. "I want to touch it" she says. Is it a statue? I explain she can't touch.
The visitor's chair is now free. "I want to sit in the chair". I explain she can't. There is already a long line of people who want to sit and silently communicate with Marina.

Grace stands up abruptly "I don't like that lady", she says as she marches off.

We go up to the 6th floor. A docent warns us about the nudity in the Abramovic show. But the sound, not the nudity is the problem. At the doorway of the first gallery we listen to the moaning, groaning, rasping and slapping sounds emanating from a roomful of early videos playing simultaneously. U turn.

We try the final rooms of the exhibit, walking quickly by the slow-mo videos and light box shots of Marina's punished and bleeding torso from a recent re-performance, and go round a corner. I am briefly startled by the incredibly high resolution of the image of a completely naked woman seemingly suspended on the wall until I realize it is in fact a flesh and blood naked woman precariously balanced on a tiny saddle, in mid-air. It is such a large sight that Grace doesn't seem to see it at all. At that moment she says loudly, "I want a snack!". Definitely times for a another U turn. There is just no way I can explain any of this to her!

After a welcome interlude in the 2nd floor cafe - cinnamon crisp and a delightful latte with an elegantly patterned topping of foam - we spend several hours watching giant projections of William Kentridge movies in the exhibition of his work which is on until May 13th. She is completely taken with the flow of collage and drawn images, watching every film to the end and some twice. (I count at least four cafetieres.) She seems undisturbed by images of torture and destruction scattered through the Anti-Apartheid animations from the 1990s . Finally she announces, "I love this show" and "I want to draw, right now".

Fortunately, MOMA has provided a Shape Lab in the education wing with many great hands-on activities and art materials for kids of all ages to respond to what they see in the galleries and make their own art, open through August 30th.  However, if you loved the Abramovic show and want to find a place to hurt yourself in a meditative fashion, I am afraid you have to go somewhere else. 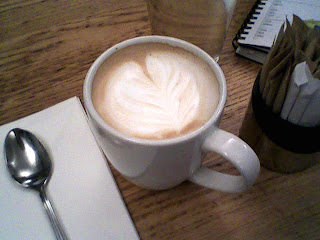