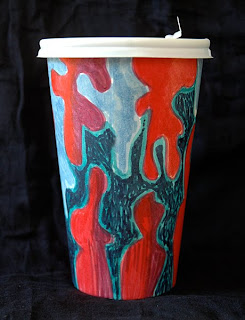 
A lot of discussion has been going on recently amongst artists and critics - again, still - about the handmade art object versus conceptual art (in which the idea is perceived as being more important than the actual artwork). During the Spring art fair week last month, a fair in Chelsea called Independent showcased a group of international galleries interested in both. Ideas were balanced by well-made art objects and there was much attention given to thought-provoking installation. Independent was the brain child of Chelsea art dealer Elizabeth Dee who has a consistently interesting gallery program along these lines in her Chelsea space. Visit the upcoming program here.

Independent was held on four floors of a huge gallery building on 22nd Street just off the West Side Highway. On the ground floor, art and concept married to create some terrific sandwiches at the Farmcart table, a business started by an artist and manned by artists during the fair. The food and the Illy coffee were amazing, although the artists on shift were remarkably grumpy. Perhaps sandwiches are better served in New York by actors than by painters?

Upstairs, among the galleries, hands down my favorite piece was a voluptuous crimson vase displayed in a bell jar at Moss Gallery. It was rather off-center and a little lumpy but of the most exquisite delicacy. Its rare and extraordinary craftsmanship was in the fact the work of bees! Tomáš Gabzdil Libertiny, a Slovakian-born designer based in the Netherlands, makes a form which goes into a hive and the bees build the honey comb over and around it. The crimson comes from a dye dripped into the hive, ingested by the bees and secreted in their wax. This detail reminds me that Charles Darwin used the same dye technique 150 years ago to study how bees build their cells, a pleasing cross-reference.

The dealer added another interesting twist. Once the bees have made a vessel in this way, industriously building it around the form, that particular hive refuses to do it again. They are busy but apparently they aren't stupid! Well, it isn't exactly handmade, but that's what I call one of a kind. 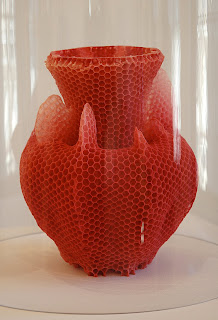 Crimson Vase, Made by Bees
Studio Libertiny at
Moss Gallery NYC
Posted by Gwyneth Leech at 7:10 AM