I came across an apple sale on 9th Avenue the other day. 43rd Street Kids Preschool were raising money with a fine selection of New York States apples - Macoun, Macinstosh, Honey Crisp and Empire. I am a sucker for apples generally and the New York State varieties are terrific in season. I staggered home with plenty (watch the elbow!) and now need a recipe. I am still dreaming about a dish of hot apple crisp and a hearty cup of coffee I had with it at the 165th Annual Dutchess County Fair not too long ago. 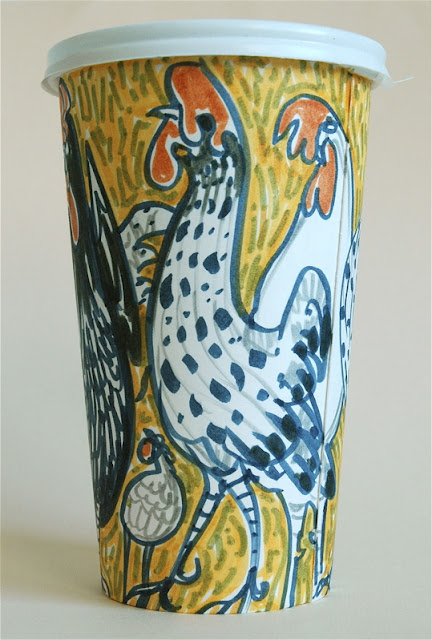 I was there at the tail end of the summer with my sister, her husband Scot and my younger daughter. Kitty and Scot have a farm in Dutchess (Scot is a Timothy Hay farmer among other things, but that is another story) and they go every year. There are animals, agricultural exhibits, carnival rides and food, food food. Where to begin? How could anyone eat their way through it? We did our best, and here I am two months later still thinking about that apple crisp.

On the animal front, there were cows, pigs, sheep, goats, rabbits. All highly entertaining to the seven year old member of the party. Being a city kid, Grace usually only sees these in books. 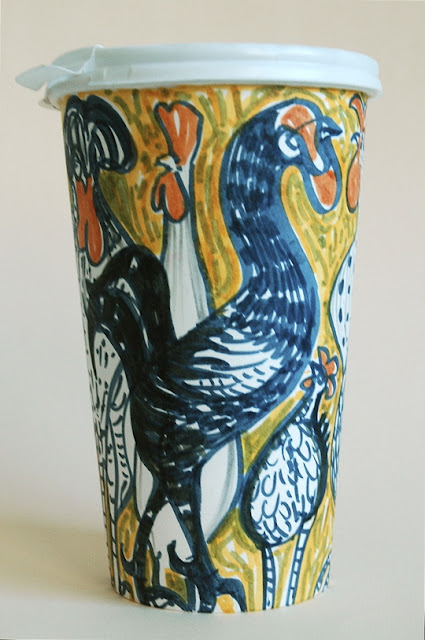 Towards the end of the animal exhibits we entered a large hall - chickens and roosters! The fancy breed poultry!! The cages in rank upon rank took me straight back to the first time I saw this type of exhibit - 1983, the Royal Highland Show outside Edinburgh, Scotland. I was an art student. Those birds were heaven-sent. At least five years of poultry-inspired art ensued: paintings, drawings, sculpture and videos. There is something in the shape of a rooster as it cranes and struts that has persistently fascinated me. Generally, I don't use chickens as subject matter anymore but an underlying form is still lurking in my artwork and pops out when I least expect it. Why, a veritable flock of chickens appeared unexpectedly on this cup drawing just the other day.

They reckon dinosaurs looked a lot and walked a lot like chickens (and ostriches and Emus). I like that thought.