A Pitman Painter in the Family


As I was walking down 47th Street recently, I came to a halt in front of a poster depicting coal miners holding paintings and brushes. The Pitmen Painters by Lee Hall is playing just two blocks from our apartment through December 12th. I had to go see it. 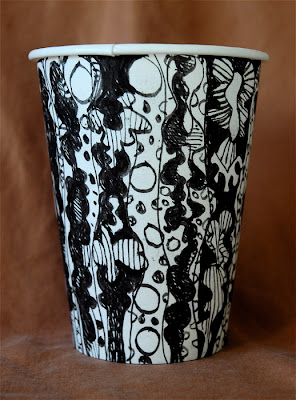 The play is funny, and melancholy, the thick Northumberland accents a little hard on American ears. A group of miners learn to paint. It changes their lives, but does not change where they live. They remain rooted in their small mining community and make art about it for the rest of their lives.

One character is a young man, unemployed, unfit for the mine for some reason. He is the only character to break away from the mining world. He joins up, marches off to the second World War, and exits the frame of the play.

This echoes uncannily my grandfather's tale. Michael J. Gallagher, born in 1898, was a sickly boy in a family of Irish Pitmen in Scranton PA and he was never employed in the mines. He joins up for WW1, ships out - and contracts TB at boot camp. Fortunately for me - and his other descendants - the story doesn't end there. He is sent to a sanatorium to convalesce. He draws to amuse himself and a doctor is so impressed with his talent that he gives him all the materials he needs and recommends art school. 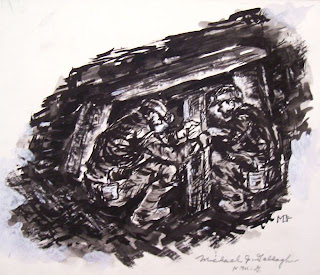 Mike recovers fully, moves to New York City, works as a bell hop and takes etching classes at the Art Students League. From there he goes to Philadelphia to the School of Industrial Arts, and meets Katherine McCallum - a fellow art student who came from Bloomsburg PA, just over the mountain from Scranton. They marry, three children follow. Louise Leech, the eldest daughter (my mother) grows up to be an artist too.

Mike never returns to Scranton and he makes his way as a print illustrator whose principal medium is wood engraving. His spots appeared in the New Yorker and other magazine for years. At a time of great hardship for the family, during the Depression of the 1930s, Mike is offered the job of technical director of the Philadelphia Printmaking branch of the WPA art project. This is a financial lifeline and a creative boon, leading him to produce a striking series of dark and haunted images in wood-engravings and in a new technique he develops with Herbert Mesibov and Dox Thrash; The Carborundum process. His subject of choice - the coal mining life of his youth. Toiling miners below ground, miners trudging home at nightfall against a backdrop of breakers and slag heaps, mine explosions and brief cheerful respites in prints such as Saturday Evening, where lovers are out walking at sunset, create a vivid evocation of that now-vanished world. 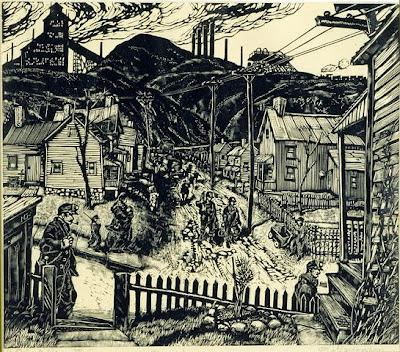 My favorite print is the Coal Miner's Kitchen. To one side, a blackened miner is washing at the sink, exhausted at the end of the shift. On a cast-iron stove in the foreground the coffee pot is set to boil by the shadowy miner's wife. A deep-seated memory from his childhood. 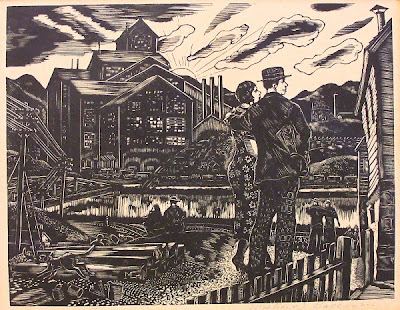 In her recent review of the play, Roberta Smith wrote, "“The Pitmen Painters” was written in part to protest cuts in arts endowments in Britain. Its lesson is that in looking at art and articulating our responses, we find essential parts of ourselves that enable us to lead happier, fuller lives and, yes, probably be better citizens. That is something that no nation can afford to ignore."

The legacy of that brief shining moment of unprecedented arts funding in the USA which was the WPA art project of the 1930s lives on in museums and libraries around the country. I have learned that some 16 of my grandfather's WPA prints are in the permanent collection of the Metropolitain Museum here in New York City. I plan to make an appointment to see them.

Posted by Gwyneth Leech at 2:01 PM